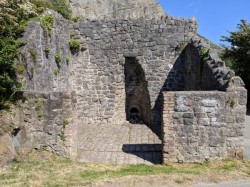 I didn't get started until 8:00 am mainly because I spent too much time over breakfast chatting to another guest. He was a pilot and he'd spent a year in LA doing flight training at Torrance airport which I can see from my house. So we had a few things in common.

The route to Weston-Super-Mare I knew was awkward going a long way inland to cross the M5 motorway and then cutting back. The first leg was to a small village called Kingston Seymour. It was all road walking and I tried to pick a way that was all on quiet country roads. Difficult to determine just from a map which ones would not be busy in country rush hour, but for the most part there weren't many cars although there were quite a few farm tractors towing tanks of that cow poo slurry. After that, I followed essentially the same path as Ruth Livingstone. She had walked around England and wrote an excellent journal which eventually became a published book. In her journals she included the daily GPS tracks of her path. I grabbed the ones of interest and integrated them into one track that I have on my phone. It includes the sections where she tried to get through only to be stymied by a river, ditch, motorway, etc. Even with the help of her track, it was still a challenge. I found the way over the motorway without any problem and then it parallelled the motorway for a couple of miles. It went over fields that had just been sown as I could see the new green shoots in lines. Unfortunately the farmer didn't leave any footpath along the edges so I tried to walk down the line between two rows of plants and I picked the one where his tractor wheels had been as the soil was a bit firmer.

After a couple of fields the Duke I was following turned inwards so I knew there had to be a bridge but it wasn't obvious where. Initially it looked like it was at the corner of the field because I could see some concrete and railings there. But it wasn't the passable bridge I was looking for. Eventually, I found a small wooden bridge buried in the hedgerow. A couple of fields later, there was a small river to cross. On the other side was a lot of kids and a few adults getting canoes ready. It turned out to be an outdoor adventures course. Initially I thought the bridge would be there but the wooden ladder I could see just went down to a small landing dock on the other side of the river. My bridge, when I found it, was further away and was an old stone bridge also completely buried in the hedgerow.

From there I crossed back over the motorway and thereafter it was all road walking to Weston-Super-Mare. I could have picked any route but I didn't particularly want to walk through several miles of housing estates so I opted for the road that went around the town towards Sand Bay. From there it was a nice walk through the woods coming out at the now dilapidated north pier. Here I picked up the promenade that went through the town. Maybe not surprisingly, Weston-Super-Mare only looked like six miles from Clevedon as the crow flies but it took me six hours to walk it.

Then I made my way to Uphill where there was a nice cafe that I stopped at for an excellent cream tea. So far today there hasn't been anything worth getting out the camera for as the terrain was very flat and most of the walking was on roads. But here there was a lime kiln and a sheer cliff that I thought was quite an interesting natural feature. Then I found out it was a quarry face where they had dug out half of Uphill Hill (named by the department of redundancy department). But it was interesting and there was a nice lady there who was a guide and she was happy to walk with me pointing out all the features including the fact the Neanderthal Man had lived in this area. Also the lime kiln was used for two types of lime found here. White lime was used for whitewash to paint houses and brown lime was lesser quality and that was used to make mortar for stone walls.

Then I headed for bike trail number 33 that I knew from research ahead of time was a new path that was much shorter then the one on Ruth's track because of a new bridge over the River Axe. At the bridge was a number of odd looking wooden panels created to look like driftwood. Apparently there are a lot of nesting birds here and the panels were to shelter them from the walkers and cyclists. At the end of the path, at a place called Brean, there were two very large farm camping sites with hundreds of caravans and motor homes. I picked the second one and that's where I'm camped for the night