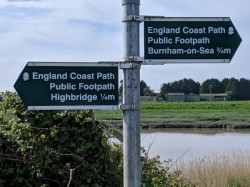 The tent was wet inside and out this morning. I did my best to get most of the moisture off with a small towel before packing it up. As soon as I reached the main road I took a short trail to the beach. I've discovered that the symbol on the map where the trail runs indicates the path is on the coastal access which is defined as the corridor where public access is available. It could be sand dunes, promenade, the beach above the maximum tide line or any other type of terrain. Today, it was sand dunes where I joined the trail but since the tide was way out, I went on the beach and searched out the firmest sand.

I haven't seen much sand since Barry Island and since then it's been mudflats, especially on the river banks. Although the mud is rather unattractive, it is a prolific food source for long distance migratory birds who make a pit stop in the spring to refuel before flying off to their final destination. I've seen quite a few bird watchers recently and I'm guessing it's their "season" for finding unusual birds. Off Brean here, the beach looked like a normal one with miles of golden sand. I was, however, put off by the warning not to go far out at low tide to the soft sand and mud as it was dangerous. But it was fine where I walked and there were a lot of vehicle tire tracks so I assumed the soft stuff was further out. It was about four miles to Burnham on sea and the sand was just fine. But, once I wanted to head to the promenade, I realized I was on a peninsula of sand and between me and the promenade was one of these "soft" areas. I didn't want to walk back so I tried to find a short way across. But it was very soft and my boots got covered in this awful mud. The tops were covered to the laces but fortunately it didn't go over the higher section at the back so my socks stayed clear of the mud. Is was just sticky mud with not a lot of water so although my boots looked a mess, my feet stayed dry.

I went to a cafe for breakfast and the lady running it was very appreciative when I told her I'd left my muddy boots outside. But the breakfast wasn't as good and she told me this cockamaney story that their was a regulation I couldn't charge my phone after I had found a table with a power socket beside it. Every time, I think I'm being polite to ask and its never been an issue on this trip before. The weird thing was I asked if she could charge it for me in the socket behind the counter and that was ok. Go figure.

Immediately out of Burnham, there was a short walk beside the tidal section of the Cripp's River up to the community of Highbridge. On the map, this section of trail is marked as the "England Coast Path" and in Highbridge I saw the first sign indicating this. It also had the acorn symbol indicating it is a National Trail. Supposedly the England Coast Path is due to open next year and I'm guessing this section has been signed in advance. I took a picture of the sign. After walking back down the other side of the river, I reached the banks of the River Parrott. This is a heavily serpentied river that has it's first bridge in Bridgwater some twelve miles away. But the trail was a nice grassy top on the mound built as the sea defense. It had a number of gates and along most of it there were either cows or sheep grazing.

Close to Bridgwater there was a small industrial area to navigate but the road was painted with the directions pedestrians should take. I reached the edge of town just after 3:00 pm and decided I'd try to find a place to stay. The reason being that this seems like it's the only large urban area before Minehead which I'm estimating is still about 40 trail miles to go. So I needed to get my phone and auxiliary battery fully charged and get enough food and fluids to last me two days just in case I don't find anywhere to buy them on route. Further, if the trail back down the other side of the River Parrott is the same as the one I've just been on for twelve miles, finding somewhere to free camp might be a challenge. And on top of that, I was feeling I needed a short day, even though I've probably gone 17 miles already. I found a guest house not too far away from the trail quite easily, booked it immediately and set up the phone to give me directions. Before dinner I went to the local supermarket and got all the supplies I'll need and judging from the weight of the shopping bag, my pack will be noticeably heavier tomorrow morning. On the way back from dinner I crossed the River Parrott and the mud on the banks was visible so I took a picture that illustrates quite how much mud we're talking about.