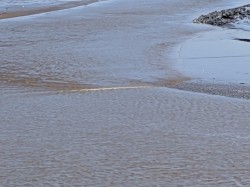 Yesterday I walked 12 miles from Highbridge down the east side of the River Parrott into Bridgwater. Today I had to repeat that for about 8 miles but this time on the west side a couple of hundred yards from yesterday's trail. As soon as I got on the trail leaving Bridgewater, it was quite overgrown. Fortunately there wasn't a lot of dew so my feet stayed mostly dry. But unfortunately it only got worse from a trail perspective. It was just over seven miles to Combwich and for at least three, maybe even four, of those miles the weeds overgrowing the trail were almost waist high. I don't think I've had such a bad trail section as long as this in all the trails I've done in the UK. It really is a shame that here is a wonderful advertisement for the England Coast Path with a beautiful river walk, designated as such on the Ordnance Survey maps and with excellent signage but a trail in dreadful condition. The other side of the river the trail was excellent, maybe helped by all the livestock that keeps the grass and weeds in check. Today's side of the river was mostly agricultural so it didn't have that inherent advantage. The problem with such conditions is the word will spread rapidly, especially today with social media, that this is an awful trail and it won't get used except by the few crazies like me that want to walk the coast path. The less it gets used, the worse it will get, the trail will disappear and the few users will start making new paths out of necessity. All the hard work getting this section of the England Coast Path established will have been in vain. I don't just want to be a complainer so when I'm done I will try to communicate to the powers that be they need to give this section some urgent attention.

Recall a few entries back, I talked about the high tide here and the tidal boar that occurs on the Severn. There is also a boar on the River Parrott which I saw many years ago. Today, the water in the river was flowing outwards but I knew the tide was coming in. I kept my eye in the river to see if a boar occurred as the incoming tide met the outgoing water and soon I saw it. I might be exaggerating that this was a true boar as by comparison to the one I saw many years ago this was quite a whimper. I took some pictures and you can just about see the little wave coming up the river. Once it had gone, the water flow had turned around and was now heading inland so it definitely was the tidal change that caused this little wave.

In Combwich, I walked past the village hall and there was a sign outside saying coffee morning. I went inside and when everyone turned to look at me I asked if they had coffee. I got invited in and was quite a hit with all the seniors there when they heard what I was doing. The coffee was good as well and very inexpensive compared to a cafe.

North of Combwich, the trail was excellent as it went through the Steart wetland that had been created by a breach in the sea defence. It was another birdwatcher's dream with several hides where they could observe the birds without disturbing them. The UK Evironmental Agency and the World Wide Fund for Nature (WWF) are jointly developing the wetland and there has clearly been a lot of money spent.

Ever since getting on the beach at Brean I have been looking at the power stations at Hinkley Point. Now I'm coming up on them. I have a history here as in 1970 I spent a summer working as an apprentice at what was then the only power station here. It had a somewhat infamous history because two weeks after I got there it blew up. I might add I wasn't involved in that at all. But it caused a big storm in the press with headlines of a nuclear power station explosion despite the fact the explosion occurred in the turbines and had nothing to do with the nuclear part. In fact the reactor responded exactly as it should in such a circumstance and shut itself down almost instantly. The consequence of this incident was that I had a summer doing absolutely nothing. I had to go in to work, but there was nothing to do as everything was shut down because the cause was a manufacturing flaw that affected all the remaining turbines, as well as many others at other power stations throughout the country and Europe. Since then, Hinkley Point B has been built and the original station that then became Hinkley Point A has been decommissioned. Also, development of Hinkley Point C had been given the go ahead and now there is a massive building site with tens of construction cranes. Fortunately I took a picture when I could see the three sites. The blue buildings are the old reactors where I worked, the ugly grey one is the still operating B station and you can see some of the cranes for building C. When I got really close, I find out that the coast trail is closed for the foreseeable future because of the construction and I would have to take a detour that essentially went around the perimeter of the three stations. It added at least a couple of miles, maybe more.

After the power station detour, I got surprised again - hills. The terrain had been so flat since South Wales I think I'd forgotten all about hills. They weren't very big ones but at least there was some ups and downs for a change. I even took some pictures of the cliffs and the strange rock patterns in the beach. I met a walker with his small dog and we chatted a bit. He asked me about getting a bus back but all I could advise was where he'd find the nearest village and to use Google to find a bus schedule. I was hoping to get to Home Farm tonight and he said that was where he'd come from and his phone app said he'd walked nearly 8 miles. It was already 5:00 pm so that looked a little out of reach tonight. I carried on and after an hour saw what might be the cafe he had mentioned. It turned out to be the local Kilve cricket club but I stopped there anyway just to have a snack and got talking to a local. I mentioned the other hiker and his plan and she immediately said that won't work as there are no buses this late.

A little later the trail went down to the beach with a warning sign that at high tide it isn't passable and there is no alternate. Fortunately the tide was close to its low point so I crossed St Audries Bay beach. It had a few islands of sand but for the most part was pebbles and rocks. But when I did find the steps on the other side back up the cliff, to my surprise at the top was a camping site that turned out to be the Home Farm I wanted to reach. It certainly hadn't been 8 miles. Just as I was setting up my tent the hiker I'd met came by and told me he had reached the village and asked a lady if there were any buses and she said there were none but she was going by Home Farm so he could have a lift if he wanted. I didn't need to tell him how lucky he was. I was pretty tired by then so I declined his invite to go the bar and instead went straight to bed.