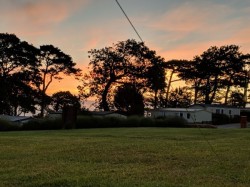 I woke up earlier than the alarm and for a time just layed in bed watching the sunrise behind the curved tree on the edge of the campsite. It was quite a spectacular view and hopefully the picture will do it justice. Then I got up and was hiking by 6:30 am. There was a mild dew and so my feet got quite damp very quickly when I went along the edge of the first field of high corn or wheat plants. But overall, the trail was nice and quite varied as it went along the cliff top. Then, after passing another big caravan park, it went down to the beach again with the same dire warning about it being impassable at high tide and had no alternative. But this was about twelve hours after yesterday's beach walk so I knew the tide would be out again. It was a very similar walk across Helwell Bay although the rocks were wetter and had a lot of slippery green algae and seaweed on them so I had to be rather careful. At the end there was a long flight of steps that took me to the outskirts of Watchett. There, a pig in a small field came running over to the fence and seemed very interested in me. Unlike cows and sheep, he (or she) had no apparent fears and was sniffing and snorting at me. I took a picture mostly for a friend who has this thing for pigs and I hope she enjoys it.

At the harbor in Watchett, there were quite a few early risers but they all smiled when I asked if there was any possibility a cafe might be open. But I sat on a bench anyway and ate the breakfast baguette I had carried with me from Bridgwater. After a short uphill road walk leaving Watchett, the trail continued along the cliffs before dropping down to a place called Blue Anchor. It was now a little later and I found a cafe that opened at 8:30 am so I had a pot of tea and a teacake with jam that was very tasty. Leaving Blue Anchor meant another forced beach walk with the same dire warning about high tide. This beach was all pebbles and not easy to make progress on. Soon I saw a local with his dog closer to the water and realized he knew a better path so I went down and joined him. We chatted a bit and he told me I'd have to walk here on the beach for a couple of hundred yards until I reached the signal sign for the adjacent railway and then I could go back up the beach and there would be a nice trail from that point onwards. I followed his directions to the letter and sure enough there was the start of the nice trail.

This trail went past a very long row of beach chalets all squeezed in with just inches separating them. Then it went around a golf course and after that I was on the promenade in Minehead walking past the entrance to the Butlins Holiday Camp and its white tent that I could see from South Wales a week or more ago.

And, just like that, I was back at the monument where I'd finished the South West Coast Path some two years ago. I met another hiker there who was just starting that trail. He was from Canada and we had quite a long chat. Then a couple of hikers came along and they were also starting their hike. I chatted with the couple for quite a while and they asked me about the Wales Coast Path as well. I told them about the good parts and the not so interesting sections. They were very appreciative of the knowledge. We helped each other with photos and then I was essentially finished.

I'd planned for this walk to take 55 days and I was done in 46. That doesn't mean I stormed through this one. My plan had the Wales Path at 980 miles and I'm not sure where I got that number because when I added up the total of all the mileage data after I'd started, it came to 868 miles. Also, the new ferry I used saved 18 miles which brought it down to 850. I guesstimated that the England section was 120 miles but since I did it in four and a bit days I'm revising that guess down to 100 miles. So the total was 950 and dividing that by 46, I ended up at just over my planning number of 20 miles per day. Two years ago I averaged over 22 miles per day so I must be slowing down as I get older. I also had a lot of foot issues on this trip, not only the spike I stepped on that infected my toe, but also with the boots causing sensitive spots that were quite painful at times on my smaller toes on both feet. Although I've used the same boots for almost all of my walks, this pair seemed different and were not as comfortable. I think they might have made some subtle changes to the design that caused these problems.

So I now have nine days before Ann arrives at Gatwick airport. I then started to figure out how to get public transport from Minehead to Barnstaple where my sister lives. All options meant going south to Taunton so I went over to the bus stop and tried to decipher their schedule. The same schedule sheet was on the stops on each side of the road but nowhere did it tell me which direction the bus was going on either side. I guess all the locals just know but for a visitor it could have been either side since the main road to Taunton was back past Butlins and the more circuitous route was past the narrow guage railway station in the opposite direction. Eventually I found a local and she straightened me out. But I did ask her how to figure out the direction the bus would take and she had no idea either which made me feel not quite such an idiot. While waiting for the bus a hiker came by who was walking from John O'Groats to Lands End and we chatted for a while. Then, just before the bus showed up, the proprietor of the guest house where I stayed in Clevedon four nights ago came by. He recognized me and we had a brief chat before the bus arrived. At Taunton I had a couple of really messy rail options and one direct one on a coach; I chose the coach even though it meant waiting a couple of hours. There was nothing open on a busy Saturday to buy tickets but there was a website that made it quite easy. Unfortunately there had been some traffic issues nearer London so when it didn't show up on time I checked the coach tracker and found a revised arrival time. Two times I rechecked it and each time the ETA slipped by another ten minutes so I stopped checking. Eventually it showed up and it was quite a pleasant ride for just over an hour into Barnstaple. I walked the remaining half mile to my sister's house.

Overall, I really did enjoy the Wales Coast Path, especially Anglesey, Cardingtonshire, Pembrokeshire and the South side of the Gower Peninsula. North Wales and South Wales less so for slightly different reasons. In North Wales, there was way too much of the trail on cycle path and I'm not sure the decision makers understand what it takes to be a long distance walking path. It was doubly frustrating because less than a mile away there were usually big hills and I believe the primary path should have been an inland one through these hills. If anyone really wanted the shorter route alongside the beach then they would have that option with the cycle path. If they truly want this coast path to get world recognition then the trail in North Wales needs a complete reroute through these hills so that it is moved off concrete onto dirt. South Wales is a different story because this is the industrial part of the country and the economic center. I understood that it was difficult to get through this area without a lot of hard surfaces but I think they tried hard to minimize it. For example, around Port Talbot there was an inland option, which I took, that is exactly what I would suggest needs to be incorporated in North Wales. The England section was very good with the exception of that section yesterday with the overgrown weeds. Seeing old friends in Newport and Portishead were a couple of highlights that I'll cherish as well as the spectacular views.

Before signing off, I would like to dedicate this walk to Derek Elliott, my sister's long time partner, an avid reader of this journal and overall one really nice guy. Keep fighting the good fight, my friend.