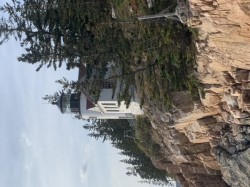 We woke to a 30 degree morning on the lake. The foggy condensation formed over the lake making the lake seem mysterious. After breakfast we drove to the AT intersection with route 27 and hiked Nobo. There was a warning sign on a tree about the Kennebec River crossing that was only to be done with the ferry and the hours the ferry ran. After seeing the Kennebec River in several other places, I’m sure I would want to take the ferry as the river is large, wide, and looks more like a swim than a ford.

We hiked the Cranberry Lake just off the AT and inly about 1000’ climb. Unlike the AMC in NH, there were actual AT signage with mileage, places and directions! The lake was small, but it was quiet ( we were the only people there) and we had a nice lunch before geading back. When we got to the trailhead there was trail magic consisting of sodas and chocolate snacks. It is good to see that selflessness live on into Maine.

We liked the lake so much, we went back there for another peaceful night. There was a young couple there with three dogs and a little girl who was really enjoying the sandy beach. We made dinner and relaxed as the sun set.

It was another 30 degree morning at the lake, so we took our time getting going. We were going to play golf, but we decided to cancel in the colder temps. Instead, we found a nice loop hike on the Maine Trails to Huts system. It was an easy but nice hike along a stream and then made a loop to one of the huts. I thought the hut might be like a shelter, but I was really wrong. The hut was a series of buildings with two apartments per building. There was a main building with dining hall and kitchen and also housed the staff. They were well appointed with utilities, including solar, a mini hydro power plant on the creek, four large propane tanks, and plenty of firewood. It seemed to be designed for cross country skiing and snow shoeing given all the ski racks.

We returned on Larry’s Trail along the creek which was very dry like all the creeks have been. When we got to the van, we decided to head towards Bar Harbor and Acadia. We spent the night at a busy truck stop off of 95 and Sharon got a shower.

We drove to Acadia Park that I han’t been to in over 30 years. We both passes at one of the gift shops. We were surprised there were no Covid questions or challenges of any kind. We drove up to Cadilac Mountain and walked the network of trails. It was very windy and most everyone wore masks. The views were fabulous even though it wasn’t the clearest of skies. I thought about the sea captains negotiating all those islands and coves.

We drove around the one way park road towards the sand beach and lookout. The parking areas were overflowing and it was a Weds. We stopped to get water at a picnic area where I had a conversation with a man interested in our van.

We visited Bar Harbor and walked the many busy streets and the wharf. It is a typical tourist town with lots of shops and restaurants. We had beers at a place that took our phone number for contact tracing purposes. That was the first time we encountered that. Our server said the season for Maine was busy since the state invited visitors over the summer.

We drove to Schoodic Peninsula were we found a wonderful spot on the water to camp. It was down a rode to a point that passed several high end estates. We walked the rocky shores in both directions and waited for the sunset over Cadilac Mountain. It was a quiet evening and another diy van from Washington State joined us. No one bothered us.

We woke to the sound of the surf and the rising sun. It was a warm morning by comparison to the 30 degree mornings we had in the northern Maine mountains. I had my coffee by the water as Sharon woke up.

A few cars came in and we had another van park next to us just before dark. The police showed up (probably called by the people who drove up). The officer was very nice and talked to us about Maine and we told him how much we loved Northern Maine. He even recommended his favorite lobster roll place.

We were off to explore the Schoodic peninsula. We stooped at the Blueberry Hill parking area where we walked on the rocks along the bay and then went up the Anvil Trail to Blueberry Hill. It was a steep trail in brief sections with incredible views of the surrounding bays and inlets at the top. We met a nice hiker who just moved to Maine from Boston. He told us about his hikes in Alaska in -20 degree weather. We promised to buy his fiancee’s (Chelsea Berry) latest record.

Sharon wanted the lobster roll the officer recommended so we set the gps to Beal Island and the great lobster roll adventure began. After an hours drive, the place was closed and a second place on Beal Island was a lobster distributor with working lobster boats. The parking lot was full on waterman’s pickup trucks as we watched lobster boats come in fro the morning’s catch. We ended up finding a place along the road and got the coveted lobster roll. It was pretty good, but we will never forget the journey.

We still had the souther peninsula of Acadia to explore. The first stop was a lighthouse. It was shorter than I expected and has been around ever since they used whale oil to light it. The next stop was Ship Harbor which was a nice walk around another point and walks on the rocks. Next was the Natural Seawall. On the way out we saw Atlantic Brewery and the magnetic pull was too much to overcome. We had a seasonal red and a brown ale. Both were good flavored beers but under carbonated. It made me reflect on how difficult it was to get the carbonation right on beers we poured at the old pub.

We landed in Walmart for the night with about ten other assorted vans and rvs. The best part about Walmart was that it was flat and we could hear there music from across the lot.