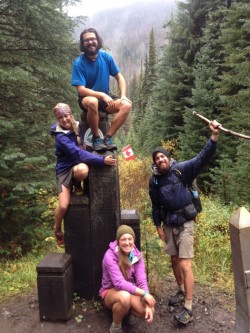 Ive been putting this off for a while The final PCT entry. In defense, today will literally be the first day that theres no more hikers at our house on Vashon, pulling what weve all decided is just an extended zero between trails?

When we made the trek back from Canada, we brought our 3rd amigo Pan with us. A day later Che arrived. Then came 6 more of our favorite hiker friends a day after him, Itis, Rocket Lama, Globe Trotter, Indie, The Zone, T. Bow. They deemed our house the Hiker Halfway House, an integral re-assimilation step back towards this crazy civilization we have found ourselves in. We continued the celebrating and lounging, professional thru-hiker style; bonfires, beer, burgers, bakeries, music jam sessions courtesy of Dom, movies, outfit fashioning via thrift shopping, gourmet kitchen cooking, and the whole 9 yards. So, it has been busy not much reflection yet.

But, Ive definitely put this off due to the finality of this entry. It does put some sort of cap on the whole journey, which seems stifling. Let it just be the ending of one chapter and the introduction of a new.
So, the ending of this little book begins just before Snoqualmie Pass. A last skinny dip in Mirror Lake at 11 am, on a foggy 20 miles before lunch day, refreshed the mind for the last 8 mile plow to the Chevron gas station, hotel, and Aardvark Food Cart at the Pass best curry dinner ever. An Oasi, in hiker terms.

Most people grabbed rooms at the hotel for the night, Stick and I snubbed delightful showers and laundry from them thankfully. We then were offered the picnic tables at the Aardvark Food Cart as a place to sleep, along with a horse trough full of cans of soda and beer for the taking. Instead of the tables, we ended up setting up the tent in the most sketchy hobo spot of the entire trail the woods behind the gas station, scratched away in the duff of the forest, amongst some hobo trash, with the vroom of I-90 in the background. It worked out just fine, but man was it goofy scrambling out of the woods in the morning as cars pulled in for a morning stop.

T Bows birthday followed our arrival at Snoqualmie. We all grabbed gas station presents for her rainbow candies and hit the trail for a magical evening at Goldmire Hotsprings. It is not accessible via its backcountry road at this time, due to paving, and requires an 11 mile tromp. No problem for us happy hikers. A round of cookies set this dramatic drop in elevation hike off to an ambling start thanks to Putt Putt and TuneBoost who made it out to celebrate with us, champion surprisers!

We swung past Silver Lake and then descended the pass along the valley of a dramatic waterfall, arriving at Goldmire as dusk settled. Transcendence we walked across old growth cedar trees above a raging stream and were met by an ethereal gal welcoming us to Goldmire. We giddily tromped behind her up a graveled path to the caretaker log cabin. She and her boyfriend walked us through the character of the hot springs as we exclaimed about the twinkly lights that surrounded us. Then we were off to grab a campsite with bear buckets in hand, and some tea candles theyd given us in tins to float around the hot springs with us as we basked in the waters. Aint no thang like a hot sprang, timidity out the window. Caves, pools, cabanas, with ambient waterfall in the background, ghost stories thanks to Indie, a starry sky, the works.

The hiking continues Stick and I ran into a weekender named Rob. He was resting on a log with an enormous backpack looking somewhat glum, Washington is rigorous. Quickly he asked if we were thru-hikers and if wed like some extra food. OF COURSE WE WOULD was the response. Happily he unloaded pita bread, soups, and tortellini on us. Stick was exuberant, now skinny as a stork, for the extras.

Then we hit Stevens Pass, Trail Magic Explosion. The Dinsmores have opened their home in Skykomish to thru-hikers. Theyve built a shower house, laundry room, and bunk house for us. They stow our food packages in a huge garage. Theyve stockpiled movies. Their double acre lawn is open for camping. And, a Spaghetti dinner was served while we were their thanks to a National Park Ranger friend of theirs. We also made many a trip to the local caf, gorging on bacon, biscuits, huckleberry pancakes, and numerous hashes galore. All 30 of us that smashed into the Dinsmores had a raucous sing-along to Itis, Right On, and others strumming away into the wee hours on our first night. Celebrity, Chess, and Hearts were the games of choice as we lulled around, like summer campers during freetime, taking in a day off.

Leaving the Dinsmores, Washington proved its cantankerous rigor blowing the stock PCT grade regulations out of the water. SWITCHBACKS!!! One afternoon we gained half a mile as the crow flies, achieved by hiking 8 miles with 4000 feet down and up. Stick and I raced the 32 plus switchback climb back up the valley, sore the next day to say the least but worth it. He managed to stay ahead, the wiely guy. Right On outright won though, speedy demon.

We ran into an incredible soul right after a somewhat creepy log crossing that took 5 miles off our PCT journey. His name is Pie Man. He hiked the PCT in Washington in 1987 back in a time where it was a truly rugged trail filled with Solitude. Our props went out to him. He had a raging fire billowing next to a large river as we rolled up. We asked if we could join him, cold and soggy. He said yes and proceeded to tell us all about the many peaks around us, his infamous travels on the PCT, and torturing his sons with hiking when they were kids. A mountain man knowing the heart of the Cascades inside and out.

Then came a fast paced jaunt into Stehekin for its famous bakery and an epic zero day. Again we pulled big miles before lunch in order to catch the shuttle bus to this Lake Chelan resort heaven. So many cinnamon rolls, sticky buns, whole pies, pizza, and baked goodies were consumed by us starved hikers. After our first stop at the bakery we all hopped the bus once again to continue down to the lakeside restaurant and post office where more food, and lots of beer, would be consumed while also rifling through our FINAL resupply boxes.

We jumped into Chelan, a last watery dunk as the weather would change around us. We all grouped together and got our fanciest dinner yet rare steak on the PCT, and thanks to Vocal blew our waiters mind with the tip Beautiful generosity. The night ended hand in hand with Indie watching numerous shooting stars and Satellites fly by from Adirondack chairs that were waterside. Stick told Right On, Indie, and I to shut it when we kept chatting away about down feathers and their loss on the PCT how many ducks wed all let fly from our sleeping bags. Hahah, oh brother.

Leaving Stehekin Pan, Nado, and I stopped in at Carls garden and got raw goat kefir, organic plump peaches, and watched as he picked Swiss chard for a customer as they asked for it. Farm to table of the purest kind. FRESH THINGS AHHH!!! And then, we had but 80 miles of the PCT left to go.

We finished strong on September 24th, 2014 with a wad of 20 of our favorite hiking buddies. Monument celebration of the richest kind, huddled under umbrellas keeping dry as we signed the final log book, rolled the last of everyones grass, and gulped celebratory swigs. Then it was 8 more miles into Canada, 2600 feet up, on a whole different quality of trail. We surprised Mom a day early awe struck face and overjoyed screams.

Then came a final dinner with all our buds, hot tubing, steam sauna, and more movies. The morning brought bittersweet farewells, and a weird change of the wind. Driving through Seattle during rush hour nearly killed us all. But we made it to Vashon Island alive and well.

2670 miles under our belts, a thousand new friends met, a trail family, tons of facial and leg hair, and a new lease on life necessity and human limits. The wilderness unravels things, may they stay that way in a tightly spun world.