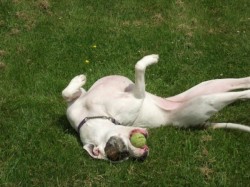 The Y, for my baby girl Alias who is no longer with us. I didn't really want a pet but my girlfriend at the time really wanted one, so we decided on a dog. I didn't want a small dog because they have small bladders and can't go on very long strenuous hikes, and I love hiking. So a big dog it was, we seen the ad for an American Bulldog puppy and we went to check her out. She was just so adorable, all white with two Brendel patches one over her left eye and one above her tail. Wasn't planning on taking the dog home with us but she was so cute just had to have her and home she went with us. I remember her standing on my lap with our paws on the steering wheel peeking over the top of it on the way home. We called her Cidney at first but later changed it to Alias after the TV Show. Alias came down with cancer about nine months old, We had a cyst on her neck removed. After we split up Alias stayed with me and I had to have a few more cysts removed over the next couple years. Alias was my best friend for an amazing 11years, we would go jogging together, we would go to the park to play fetch everyday and when it was raining she would run through the puddles then stop and swat at her reflections with her paws. She was my trail partner when I would go hiking or camping. She basically went everywhere with me until cancer got the best of her and I had to put her down on January 4th 2015. So now I want to hike the Pacific crest Trail in honor of Alias for being the greatest companion ever for the last 11 year.