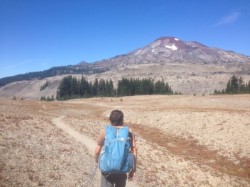 Sisters, Oregon and my journey comes to an end. My original goal was to hike to the Columbia River and with five more days I would have made it. Due to weather (two snow storms), countless blisters, stress fracture (misdiagnosed), removing a screw from my toe, and Etna Brewing; I was not able to hike as many miles as I would have liked. I did end up hiking just over 1100 miles which, as the crow flies, is about the distance from Mexico to Canada (CA, OR, WA).

Aside from the "what do you do for food on trial", the second most common question is "why". Why try to hike from Mexico to Washington. Over the past few weeks on trail, as my hiking time was winding down, I thought about this question a lot. In answering this, I think about the cast of characters I met on the trail and what they said when we discussed this very topic. While there were some perpetual-travelers on trail, those who work odd jobs to support a constant hiking lifestyle, most hikers are those in transition: kids who have just finished college, professionals who have decided to pursue a different path, or retires who are looking for something challenging to do. Like me, what most of these people say when asked "why" is that while hiking, we hope to have epiphany, a moment-of-clarity about the direction of their lives (Or perhaps just to think of a good fantasy football team name). I am not convinced this is entirely a truthful answer. I think the "epiphany" answer is convenient and is used to justify the hike in a greater sense. In reality, it seems that I (and most others) were simply looking for an escape; a chance to check out of every-day life and be someone else for a few months

Which brings me to the trail-name phenomena. I originally thought it's use was a clever (or not so clever) way to remember and identify the hundreds of strangers one meets on the trail. For example, it is much easier to recall "Mad Science" than it is "Bob". While this is true, the trail name provides a different identity. Like an avatar in a video game, one in no longer Kevin, but instead becomes hiker trash, then a Blues Brother and then Screw Loose. Like actors in a play, through-hikers are a few thousand people pretending to be someone else for a summer. A sad fact of the trail is that those who start as couples do not usually last. I know of three couples (boyfriend-girlfriend) who started the trail together and broke up while hiking - all three were (allegedly) due to differences in hiking speed. Walking out of Shelter Cove I came across a woman about my age heading southbound. We chatted, as N-bound, S-bound hikers do. I told her I was done in Sisters as I had to go back to work but, but was grateful that my wonderful wife supported this trip. She was just doing Oregon and a few miles back got cell reception. She said she received 29 text messages from her boyfriend saying he was leaving her if she didn't get off the trail. I asked what her plan was: she said she was "thinking of how she will rearrange the furniture when she gets back home." And so, maybe I did have an epiphany after all. I am happy to return to my cozy house, my beautiful supportive wife, my sweet dog; back to a nice job with good people (what up Honey Badgers). No longer Screw Loose but content and happy to be just Kevin.

And with that, the final chapter goes like this: On August 1st, my father-in-law drove Black Widow, Justin, Blues and I back to the trailhead at Highway 138. There we saw Smokey - a doctor from San Francisco whom Blues had hiked with 500 miles before. Smokey is one of those genuine people who everyone instantly likes. Leaving Smokey and Black Widow behind, we would not see another through hiker on trail for three days. Powered by blackberry pie, we made the 5 mile climb to Mt. Thielsen and had our first view of the Three Sisters far to the north. The trail was smooth and fast and we made good time. The trail skirted Thielsen, a huge orange volcanic monolith, and dropped down to Thielsen creek. After a quick snack and foot soak we continued on passing the trail's highest point in Oregon/Washington at a mere 7560 feet. We walked several miles through a thick, moss covered forest, before camping at Six Horse Spring. Irritatingly, the spring was 300 feet directly below the PCT which forced us to take a steep trail to and from the spring. We did 25 miles and set an early camp.

The next morning, August 2nd, we awoke to strong smell of smoke. The air quality was very poor and we could tell there was a forest fire nearby. The valley to the west was thick with smoke but it was difficult to tell if we were walking into or away from the fire. We later learned (from Smoky of all people) that a fire was very close to the Skyline trail (a PCT alternate route). He was on that trail and saw Smoke Jumpers exit a helicopter to battle the fire. As we walked north, the smoke dissipated and it was soon clear that we were out of harms way. He had a long hike up to a saddle and Diamond Peak - another ancient volcanic edifice. There, we rested by a pretty glacial stream. At the pass, trees were small, broken and windswept; clearly a harsh climate for most of the year. Completing another 25 miles, we camped that night under a bruised, smoky sky by a pond in a field of blueberries.

The next day, on the north side Diamond Peak, water finally became plentiful. In California trail builders seemed to intentionally avoid every lake in the vicinity. Now, the trail wound around meeting dozens of small lakes and ponds. In the morning We walked to Shelter Cove resort where several hikers were lounging about. Softy and Night Hawk had a cooler full of beer they were freely passing out cans. A guitar was produced and was passed around as well. Trail Angel, Legend, and I did a blasphemous rendition of Redneck Mother. We traded trail stories with several hikers we had not seen in a few weeks. One Of Us, the first person Amanda and I gave trail magic to back on the McCloud rolled in. Both One of Us and Softy and worked in Yellowstone for a season - we had a great time reminiscing about the park. Back on trail Blues and I did another ten miles and camped at Bobby Lake.

On 8/4/15, leaving Bobby lake we passed dozens of lakes and ponds. The forest became very lush with tons of blueberries to eat at will. We walked through a large burn area with lots purple and white wildflowers and camped at Horseshoe Lake. There we met Sam, a Cambodian refugee whose family fled the Killing Fields in 1979 to come to the US (his family later fled Tacoma for Iowa when St. Helens erupted as they were convinced all the Cascades were going to blow) . Blues and I took a swim and then did laundry in the lake. Later, Black Widow and her sister came into camp - it is always a pleasant surprise to see someone you know on trail as everytime you say goodbye, you fear it may be the last time you see them.

Hiking at 6 AM the following day, the trail wound through more lakes and dropped to Elk Lake Resort. These little towns and resorts are like a Mountain Man rendezvous where dirty hikers stagger out of the woods to catch up on trail life. After breakfast and a bloody mary, we said goodbye to the usual suspects and headed back out. Later that day we met Rare Bird and NoName a 70 year-old couple from Laramie, WY who were completing Oregon in order to bag the entire PCT. So inspiring. After racking another 25 miles, Blues and I camped in a meadow by a pond at the foot of Middle Sister - a red mountain streaked with dirty glaciers.

That nigh was very cold and in the morning the ground was covered with frost. That entire day we hiked in a volcanic pardasie with the Three Sisters to our right and volcanic towers to our left. We climbed through a steep lava flow near North Sister and came to a ledge where Jefferson, Hood, and Adams were all visible. We came across Hoots and JOK who had been out bagging Sisters for the past couple of days. Let me rephrase that - they had summited S. Sister, Broken Top, and were gearing up to climb Middle and N. Sister. Shortly thereafter, we ran into One Of Us who told us there was trail magic going on at Lava Lake. We took the the side trail to Tarzan's camp and were treated to brats, beer, cokes and chips. Tarzan had been injured on the trail and decided to spend a few days providing magic. We begrudgingly left Tarzan's camp and headed into the Mackenzie lava flow. One of the most spectacular and daunting sections of trail, this was the largest lava flow I had ever seen. Literally, lava rock void of life was visible as far as the eye could see. The trail was very difficult for several miles having to climb for three miles on small unstable rocks. It was like hiking on another planet. Then, after descending on the worst trail conditions since the San Jacinto Mts in California, we camped by a lava flow in a burnt forest.

My last morning on trail was fast and easy. After a short two mile climb, a well maintained path brought us 10 miles down hill, mostly though an old burn, to Santium Pass Highway. We got a ride into town with some college kids from the east coast and had a huge breakfast on main street in Sisters. Carmen and Amanda arrived in town a short time later. It was a wonderful reunion as I had not seen Carmen in a month. The four of us had a great time relaxing and exploring this cute little town. The next morning, I drove Blues and Amanda to the trailhead - Amanda was going to hike the rest of the way to Canada with Blues. I took another hiker to the trailhead on at Mckenzie Pass and met back with Carmen for the bittersweet drive home to Portland.

The trail, the cast of characters, the help from random strangers has made this summer one of the best of my life. A trip I will never forget. A big thanks to my brother-in-law, Blues who was the best hiking partner I could imagine. Always encouraging, supportive and positive (even when my drying underwear blew into his face at Mt. Laguna). Best of luck to him on the final stage of the hike; I sure wish I could be there. Also huge thanks to my lovely wife Carmen - not only did she enthusiastically support this journey, she arranged hotels, sent supplies, flew to California to take me to trailhead at Kennedy Meadows, took care of the dog and did countless things at home I was not able to do. A big thanks to family who met us on trail and provided food, lodging and encouragement. Lastly a big thanks to the countless strangers who provided rides, trail magic, trail houses, water caches, and comradery.

So with that, audios Screw Loose (by the way I still have the screw) and hello Kevin. It will be nice to be home in my own bed. Thanks to everyone for reading these posts - hope you enjoyed them half as much as I did writing them. As always sorry for the typos and grammar.