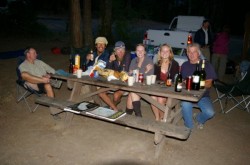 Dave and I had the good fortune to run into the 6million steps documentary film crew last year. Stacey, the crew chief, was kind enough to forward these pics late last year. Although I carried a point and shoot camera last year I discovered on the first day out of Campo that the battery in the camera ( I had a charged one and the charger in my bounce box) was dead. After that, it just didn't seem that important to take pictures. There were wonderful pictures posted by other hikers with more talent than I could ever hope to have as far as the landscape was concerned. It was the people whom I met and interacted that deserved better. I also started a journal last year, but it was a poor thing. Basically when I hit a trail town I'd spend a few hours writing out my experiences with pen and paper send them off to Victoria for posting...something that never occurred. Honestly, what can you do with an executive type working twelve hour days, supervising construction of house and taking care of an out of town project as well! Clearly, I deserved better!

When Dave and I hit Castle Crags we found the trail under I-5 just in time to see Triple H pull up with his dad who let him out with a 12 pack of beer as a going away present for the trail. they had just climbed Mount Shasta and descended that day. Now there's an invigorating little jaunt! For the uninitiated there is a state camp ground about a mile south but which requires a couple of mile road walk. They have a dedicated spot for PCT hikers and, even better, hot showers for as long as your quarters will hold out. As hiker support, Dave and I, with the addition of Triple H, arrived at the campground. There were a few more hikers and Dave set to making chicken fajitas. We asked the woman in the next spot over to join us and we met Stacey who was soon joined by Christa and Will.

The next day Stacey, Dave and I staked out the bottom of the trail until Creamsicle and Blue Eyes emerged....these guys could get a paying job doing stand up! Anyway these pictures are from that night!