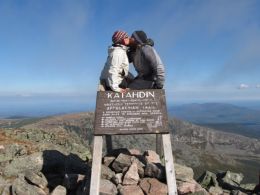 The End of a Journey

I was up at 430 in the morning awake with anticipation of the day ahead. I stayed in my hammock until 5am when I started waking everybody up. I made my last batch of coffee and oatmeal and ran out of fuel just as my water got hot enough. We all packed the necessary gear for the day and stashed extra gear back in the woods. This climb is the hardest on the entire trail so there was no reason to bring a full pack up there. By 645 we were out of camp and signed the trail register to begin our climb up Katahdin. The first mile up to Karahdin Stream Falls was gradual and we seemed to float uphill. Everyone was so excited. Along the way we ran into a ruffed grouse that had its chest all puffed up.

At the stream crossing Pace and I filled up on water then took one last break before the 4 mile push to the top. We checked out the spectacular falls on the way up then kept moving. The farther we went the harder the climbing got. We were playing leap frog with lots of other hikers along the way. When we got to "the cave" and I knew the climb was about to get serious. We collapsed our hiking poles and began the 1 mile rock scramble up to the gateway. There were sections with rebar drilled into the rocks where you had to pull yourself up. As we got above treeline and into the wind we got chilled down pretty quickly. Pace and I put on our rain jackets in an attempt to stay warm. There was a train of hikers heading up that mountain and a few spots where we had to wait for people to navigate the technical sections. The views were amazing the higher up we went. It was looking like we would have a clear, but cold, summit. Good thing we had lots of extra clothes.

After an hour or so of climbing we reached "the gateway" where the tablelands started. This was the 1.5 mile long ridgeline where we could see Baxter peak, the northern terminus of the Appalachian Trail. We hiked along in awe of the views with DA, Gribley, and PoF. We passed Head-n-Out and Tag-n-along before the final 800 ft climb to the top. Cheese water and Towley were in front of us and arrived at the summit first. Pace and I got behind DS, Grib, and PoF and walked up to the summit alone. The last 100 yards to the sign felt like a dream. I couldn't believe we could see the end of the trail!! I started hooting and hollering as we got closer and Pace and I walked up to the sign together. We paused for a moment, took each others hand, and touched the sign together at 10:15am. That was it! The end of a Journey! We had done it. We had hiked the entire length of the trail. So many feeling were rushing through our heads. I felt on top of the world.

We had beaten the crowds up there so Pace and I took the opportunity to take our summit photos. She triumphantly climbed on top of the sign and raised her arms in the air. I was so proud! We posed for lots of pics together and DS was a great photographer. Everyone took their turn on the sign as more and more hikers summited. There were over 30 thru hikers up there. We all posed for a huge group photo. Pace and I got all of our warm clothes on and enjoyed some celebratory beers up there behind some rocks. Some hikers didn't spend too much time up there and the summit started to clear out.

Our group posed for a summit photo and afterwards everyone told me the group had a surprise but I had to go stand away. I was allowed to turn when they yelled. They yelled and I turned to see 8 of our friends creating an archway to the Katahdin sign. At the end of the archway was Hungus on one knee. I began to cry tears of happiness. I walked, or stumbled, thru the passage to Hungus. He asked me to spend the rest of my life with him. I could hardly contain my answer and practically yelled "yes"!!!! We hugged for the longest time and professed out love over and over. My "ring" is a piece of gold in a raw form. Together we will design the ring. I learned that he had carried it the entire trail and all our friends, on the trail and back home, knew. He had asked my father permission over a year ago!!!

Everyone celebrated the two monumental occasions atop the mountain. After a while we knew we had to head back down.

So yes...I had a long time to plan the summit proposal. All the hikers knew and were so excited for us. It went off exactly as planned and I couldn't be happier! After we were done the whole crew sat behind some rocks out of the wind finishing all of our summit beers, champagne, and whiskey. It was so much fun. I had one final order of business before heading down. KEN! I held The last of his ashes over that sign and proclaimed how he was now officially a 2000 miler and that Katahdin is the ultimate resting place. I scattered his ashes into the wind over that great sign. Ken now rests in all 14 states, in some of the choicest spots, along the entire AT.

Around 1 we decided it was time to head down. The hike down from the summit along the tablelands was very emotional. We were now done with the trail, Pace and I are engaged, and Ken is resting in piece. I'm not gonna lie... I cried a bunch. When we got to the gateway we had to put our game faces back on as the downhill was about to get serious. All of the rebar and steep scrambles were harder going down. We made it safely back to the cave and were able to relax a bit. We took one final break at the falls before finishing our hike. At 415 we were back at KSC and gathered up our gear. Ole' Man from the hostel was waiting with two suburbans to drive all of us back to his hostel. We said goodbye to other hikers and piled into the cars. When those doors closed and we started moving it became very real that we were done hiking.

I chatted with Ole' Man a lot about how the hostel has changed in the last 5 years as we watched Mama K disappear behind us. In Millinocket Pace and I just dropped gear on our bunks and went directly to get food at the AT Cafe. Dinner was great and we went back to the hostel. Both of us made lots of phone calls back home then eventually showered. Around 9 everyone ended up at the Blue Ox bar for some celebratory beers. By 1130 we were both shot and walked back to the hostel to get some much needed rest.

Today was an epic day on so many levels. We have come so far, literally. I wouldn't have had it end any other way than with good friends, good beers and good times. Cheers to many more adventures!!!!

Hungus And Shawn On The AT

A journal to document the adventures of Hungus and Pace on their 2012 north bound thru hike of the Appalachian Trail.

Click the link above to check out Hungus and Pace's 2017 JMT SOBO Thru Hike. There is also a link for the 2013 Long Trail but only a section was documented online. Hungus finished his last LT section in October 2016.