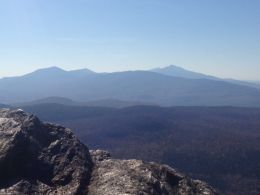 I slept pretty well last night. When I go from hammock back to shelter it is always a little rough. When I have a few nights of shelter sleeps in a row they seem to get better. I went through my morning routine and was heading north at 910. The trail brought me downhill to a dirt road crossing then over a smaller mountain. At the next dirt road I took a quick break because a two mile uphill to laraway mountain was about to start. The trail uphill followed old overgrown logging roads for about 3/4 of the way which made the grade nice. Near the top, the trail went under a long 40 ft tall rock overhang for about .1. It reminded me of weeping rocks in Zion national park as there was water dropping from overhead in many spots. After the overhang the trail worked up towards the overlook. I met a party of 4 and a young couple. I pointed out the mountains we were looking at which were whiteface, Madonna peak, and mt Mansfield. The one girl tried to argue with me that "the nose" was camels hump. I pointed out that there were large antennas on it and camels hump is undeveloped.

After a nice chat with the foursome I hiked on and hit the true summit. The next mile was pretty muddy and could definitely use some bog bridges. The trail followed the ridge through the last of the boreal forest I would get to see on this trip. I said goodbye to the spruce and paper birch trees. After the ridgewalk the trail worked down to Corliss Camp. Another very unique shelter with a door and large picture windows. I broke for lunch and ate double tuna and pepperoni wraps. As i was eating I saw a hawk take out a chipmunk behind the shelter! When I was done eating I grabbed some water from the spring, signed the shelter register, and started my last 6.7. Of course the trail went uphill again to butternut mountain. I had eaten too much and had to stop a lot on the uphill. There was no view at the top, the trail just went right back downhill. The next 3 miles or so went gently downhill. The sound of the leaves was starting to drive me mad. Crunch...swish...crunch...swish. Nonstop for an hr and a half well really non stop at any elevation under 2500. I got to a small stream crossing and stopped for more water. I was feeling less full so I rocked the last 3. The trail took me up two small peaks of Bowen Mtn with a nice ridgewalk in between. At the end of the second the trail dropped STRAIGHT down. It wasn't rocky or technical just dirt and lots of leaves. I finally reached he shelter turnoff and found the pipe spring the guidebook mentioned. I filled up water for the night then walked the .2 to the shelter.

When I arrived there was a large group of hikers setup. I decided to hang my hammock. Turns out it was a bunch of VIP's from the green mountain club. I set up camp then went over to the picnic bench to cook dinner. I was still kind of full from my late lunch so I sat and talked with everyone for about 45 min. They gave me some great history on the shelters and talked about the new bridge being built over the Winooski. The bridge builder was even there! I told them how impressed I was with all of the privy's and they said they have the most advanced backcountry waste management setup in the country. All of them are moldering and well taken care of. I think one of the guys who writes the guidebooks was even there. They talked about the next shelters to be rebuilt too. I told them of my fav ones so far. Finally my stomach began to growl so I went and cooked dinner as they all hit their sleeping bags. I made a chili mac mountain house that I had been saving. It was delicious. After dinner I gathered my stuff and crawled into my hammock. That night time breeze is starting again. Hopefully it doesn't pick up too much. Tonight is my last night. Tomorrow Old Tomato is picking me up and I make the drive back to NJ. I am so psyched to see Pace as it's been too long!!

This journal documents a section on the Long Trail. Hungus finished his last section in 2016.