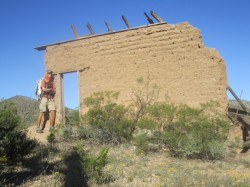 I write from altogether unfamiliar surroundings - I'm currently sitting at a polished wooden desk staring at a glowing computer screen, trying to ignore the low humming of the refrigerator in the kitchen and the brief interruptions of passing cars outside. Curious haunts indeed. I am back in civilization after having completed the CDT, and am finding the adjustment period somewhat trickier than expected. I've been off trail for several days, but still have trouble sleeping in a bed. I'm tempted to pull out the old Thermarest and sleeping bag again, but know that will just prolong the transition process. Minor difficulties aside though, it feels good to have completed something of this magnitude, and, when the time comes and I'm settled into a more normal routine, it'll be fun to look back on the journey a little. In the mean time, for my last post here I'll give a quick synopsis of my last week on the trail and tie up a few loose ends.

My zero day in Silver City was great. With the helpful advice from a friend of a friend (or more correctly, relative of a friend) who posted in the guestbook, I found some great restaurants in Silver City, and basically spent the entire day eating good food. Thanks, Pete, for the insider's scoop on all the good places! I'm sorry we never crossed paths, but I have a feeling I'll be back in your neck of the woods - you live in an awesome part of the state!

The section from Silver City to Lordsburg was rather uneventful, except for the first of several "lasts" for the trip. Last campsite in the Ponderosas, last road walk, last National Forest, last open pit mine to walk by, etc. The night I was supposed to stay in Lordsburg I had the unexpected privilege of camping with a very good friend and his cohorts, who are traveling around the West for a college course. Eating borscht in the middle of the Chihuahuan Desert alongside 21 vivacious college students while watching strange low-flying aircraft traverse the desert sky has to be one of the most vivid memories from the latter part of my trip. Thanks, Chase, for picking up a dirty vagabond behind the Lordsburg Valero station. And thank you Phil and all the Semester in the West folks for letting me share the evening with you - I've never met a nicer, more welcoming group of college students.

The final section, from Lordsburg to the Mexico border, was a fitting finale for the CDT. While surely not as grand a finale as CDT northbounders receive in Glacier, hiking through the Chihuahuan Desert on my final few days was a real treat. From the greasewood flats to the rugged peaks of the Big Hatchet Mountains, I seemingly had the entire place to myself, and got to embrace the final days without any outside interruptions. Several highlights from this section include exploring the ghost town of Old Hachita - its broken down adobe buildings the real life version of a Western set - and climbing Big Hatchet peak, which towers 4000 feet above the desert floor.

Though I certainly entered this section with some trepidation about hiking near the Mexico/US border and remained largely on-edge while down there, I had absolutely no problems and felt safe the entire time. I didn't run into Border Patrol until I reached the actual border (literally: as I was taking my final steps to the now-toppled Crazy Cook monument three agents pulled up on four-wheelers - I think they knew I was coming), and they were very friendly, even offering me food and water. There seems to be a good relationship between Border Patrol and the CDT community, which is awesome.

I would be remiss if I didnt give a shout out to the Continental Divide Trail Coalition (CDTC) for their work in establishing and stocking 5 water caches between Lordsburg and the southern terminus. Before I reached southern New Mexico, I emailed Teresa with the CDTC, and she put me in contact with Jeff, one of their volunteers. I was able to pay Jeff to stock the water caches with fresh water as well as pick me up at the border - two crucial services that would have otherwise made my hike to, and return from, the border almost impossible. Thank you Jeff, Teresa, and the entire CDTC for all of your help! You make the logistics down in the New Mexico boot heel much more manageable!

So yes, my journey along the crest of North America is complete. I was picked up at the border by Jeff and my dad on November 1, and after a nearly 3 hour drive on very rough roads (which included getting stuck in a ravine for a brief period) we made it back to the highway and shortly thereafter returned to civilization. Overall, the CDT was a fantastic trip that was transformative in many ways, and I consider myself very privileged to have had the time and means to pull it off. I leave the trail with the two seemingly contradictory feelings of humility and empowerment. Hiking the CDT was a humbling experience, as it reminded me how big and wild and downright gnarly nature can be, especially with the added vulnerability of traversing a landscape by foot. Outside factors such as terrain, weather, and water availability can dictate your success, enjoyment, and safety just as much as your own actions. It's not just about how competent of a hiker you are or how strong your will is, you need a little luck to complete a trip like the CDT in one piece. I realized this early in my hike with a moose encounter at Red Eagle Lake in Glacier, and it was a very humbling realization indeed. But hiking the CDT also leaves me with a sense of empowerment. This was my first thru hike, and more significantly my first expedition-style trip of duration longer than a few weeks. I now feel more confident in my ability to plan the logistics of such a trip, and to put those plans into action. Also importantly, I come away knowing that I actually enjoy being out in the outdoors for months at a time - I felt as much excitement with each coming day in October as I did in June. It's no use doing this type of thing if it isn't at some level enjoyable and rewarding, and I'm glad I derived both of those feelings throughout the entire length of the journey. This newfound skill set and confidence, seasoned with a heightened sense of respect and humility, will hopefully help me on similar extended expeditions in the future.

Before I wrap it up, one final acknowledgment. I've made a concentrated effort in these blog posts to thank everyone who helped me along the CDT, although regrettably I'm sure I've missed a few. To everyone who lent me their support, tangible or intangible, thank you so much, I hope I can return the favor some day. I have not yet, however, given the two most important people in my journey an appropriate acknowledgment of gratitude. So thank you Mom, and thank you Dad, for your unwavering support in this endeavor. From the initial inspiration, to serious consideration, to commitment, to planning, to the execution of the trip itself, and finally to the conclusion - you two have been with me at every stage. From Mom tirelessly researching and purchasing a sat phone for me, to Dad sending out each of my resupply boxes and admirably responding to spur of the moment texts to "send shoes to Frisco" or "need camera memory card in Pie Town box," I certainly could not have completed, let alone started, hiking the CDT without your support. So thank you Mom and Dad: this trip meant a lot to me, but having your support meant even more.

OK folks, the sun's shining outside, so I think I'll go out for another walk (maybe a little shorter this time). Thanks for your support and interest, and I look forward to hearing about all of your adventures. To quote from the great Ed Abbey, "May your trails be crooked, winding, lonesome, dangerous, and lead to the most amazing view," whatever your "trail" may be.