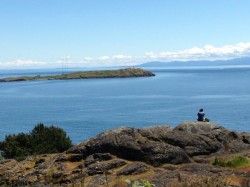 I first became interested in the Pacific Crest Trail while hiking in Oregon in 2010. Late in the day, three hikers with minimal gear passed us on the PCT trail from the McKenzie Highway to the Belknap Crater. They were thruhikers, had started in Mexico, and when I asked where they were planning to camp, they said "wherever we end up tonight". Back home, I started looking at the gear that thruhikers use and the trail itself. With less than half the weight of my backpacking gear from the 80's, they hiked twice as far in a day over some amazing and beautiful hiking terrain. Then in 2011 an old friend, Steve Barlow, said he was going to hike the entire PCT when he retired in 2014 and invited me to come along. I said I would hike a section of the trail with him. As I learned more, worked out my gear, and started training I found that I wanted to go further. We have a start date now, April 18.

The gear list was added after I finished the PCT, listing all the gear that I actually used.

The resupply plan was also added after I finished the PCT, showing how I resupplied. At the start I only had a resupply plan to Kennedy Meadows!

In 2015 I hiked the John Muir Trail (see Postholer Journal link below) with my wife and daughter. For me the Sierras were the best part of the PCT.

In 2016 I cycled from Canada to Mexico along the Pacific Coast bicycle route with my wife Dianne. Photos from the cycling trip are also included in the flickr link below.

The Pacific Crest Trail is a continuous footpath from the US/Mexico Border to the US/Canada and is 2,663 mi (4,286 km) in length. It ranges in elevation from just above sea level to 13,153 feet (4,009 m). The route passes through 25 national forests and 7 national parks. The trail passes through California, Oregon and Washington State.