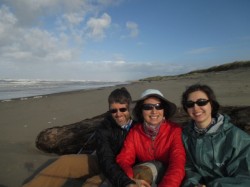 Early B., Dianne and New B. on Oregon Coast

JMT - the best of the PCT

From my PCT thruhike last year, I felt that the Sierra was the most amazing part of the entire hike. The John Muir trail covers most of the best section. It will be different this year because I'll be starting later (about two weeks later at Tuolomne Meadows), I'll be going south instead of north, and I'll be hiking a little more slowly with Dianne and New B.

The John Muir Trail (JMT) is a long-distance trail in the Sierra Nevada mountain range of California, passing through Yosemite, Kings Canyon and Sequoia National Parks. From the northern terminus at Happy Isles in Yosemite Valley and the southern terminus on the summit of Mount Whitney, the Trail's official length is 210.4 miles (338.6 km). Most of the trail is above 8,000 ft elevation while 35% is above 10,000 ft. The JMT climbs 9 major passes before ending on Mt. Whitney at 14,500 ft.