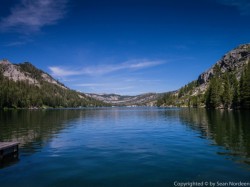 The Tahoe Rim Trail has been on my radar for a couple of years now. I was first introduced to the area during my PCT thru-hike in 2009. I loved the trails of the area and wanted to come back to do some more hiking here. After doing some research I learned about the Tahoe Rim Trail and its great scenery. And for a long trail, its very easy to hike logistically since its a big loop that goes by several resupply points.

Originally I planned to hike the trail last October. Just before I was suppose to leave, someone gave notice at work and I had to take over his jobs. I had to cancel my vacation so I could have the guy transfer his knowledge and project status to me before his last day at work. If I had known just how little snow was going to fall before January, I might have tried to hike it back in November. But thats hindsight. I've packed everything up today and am ready to go. I wanted to leave today, but due to some family issues next Wednesday, it will have to wait a week or two. I'm currently looking for a new job, so the actual date will depend on finding a block of time when I have no interviews scheduled. But I want to make sure I'm ready to go on short notice.

The gear I'm taking is what I'm thinking of using on a CDT thru-hike so this is as much a gear shakedown trip as it is an enjoyable vacation. A lot remains the same from the AT, however, I have a new Zpack's solo Hexamid shelter and a Borah CF bivy to try out. I've had the Hexamid since last November and the Borah Bivy since March and have never used them despite having done some backpacking since. I still need to buy some new rain gear (mine is from 2006 and started to show a lot of wear) but there is no sense buying something now since it won't get much use over California's normally sunny summer. I still need to decide if I want to replace my 2008 model year GoLite 20F quilt for one with slightly more loft for the same or less weight. I'll probably wait til Christmas to see what I can get from enLIGHTened Equipement on sale. I'm convinced that I could hike the CDT with what I already have. But I could still save a little more weight at the cost of some big $ .

I'm guessing that my baseweight for the Tahoe Rim Trail will be about 9.5 lbs with the camera. I'm planning on carrying 3 days of food to start to get me to Echo Lake Chalet where I plan to buy a 2 day resupply to get me to Tahoe City. At Tahoe City I'm planning on buying a 4.5 day resupply to get me back to my car. Snow is low in the mountains for this time of year so I can get away with a June hike. I'm hoping that I wont need to carry more then 2L of water so my total packweight should remain pretty light for the entire trip. I'm planning on starting off slow, 15-17 mile days and ramping up to 20-22 mile days by the end. By going clockwise around the lake, I won't have any large climbs at any one time. The overall trip should take about 9 days though I have time to let it extend a day or two if I find I'm going slower then planned.

As of last week, there were a couple of snow areas of concern. The biggest was as several mile stretch of snow after the TRT joins the PCT before Echo Lake and some possible issues near Dicks Pass in the Desolation Wilderness. Hopefully a lot of it will have mostly melted off by the time I get there. At least I know that PCT hikers are already passing through the area and thus I'll have some footprints to follow if the trail is still burried.

I will be using Blackwoods Press' Tahoe Rim Trail Pocket Atlas as my trail map and guidebook on the trail. I used their PCT atlas when I hiked the PCT and was generally happy with it. The small book size means it fits in my pants pocket and is thus easy to pull out at a trail junction to verify that I'm still going the right way. I like the book style verses a folding map style like the Tom Harrison Tahoe Map since I can just flip open to the page I want instead of having to unfold and refold the map each time.