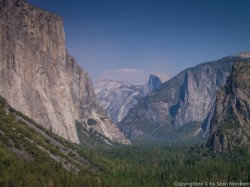 I put in a John Muir Trail (JMT) backpacking permit request for Labor Day weekend, the first day you could apply for a permit for that date in late March. Yosemite now has a new process for JMT permits so you are automatically rolled over to the next day until you say stop or you get a permit. After being rolled over for over 2 weeks, today, I finally received a permit for starting at the end of the 3rd week of September. That is about as late as I would want to start since I will still be hiking during the first week of October.

I was able to get a Happy Isle TH start in Yosemite Valley with a climb Half Dome permit, so I'm really ecstatic. I'm surprised it took that long as usually the number of people hiking drops drastically after Labor Day. I'm thinking that all the big snow in the Sierra Nevada this year has more people pushing for a later start since the trail will still be snow bound in July. And the numbers of JMT hikers the last few years has sky rocketed causing Yosemite to put a exit quota over Donahue Pass to limit the numbers as JMT hikers have been claiming almost every conceivable trailhead that connects to the JMT leaving few opportunities for everyone else. I didn't get the Merced pass through permit, meaning I have to camp at Little Yosemite Valley, which is a very short first day. I might be able to change that when I pick up my permit depending on how many walk-in permits are still available and if there were any cancelations.

Fall in the Sierra is lovely and is my preferred time to hike as the bugs and crowds are gone and the water fords are low. Usually the snow is also long gone, though with the amount that fell this year, some may remain at the top of the highest passes. It should be less than I saw when I hiked the PCT though. Given how late in the season I'm hiking, I should see some nice fall colors along the way, but I do run the risk of early season snow as I will be hiking through the first week of October. Any hiking in October is a crap shot for winter snow, with the odds increasing the later it is. That said, the first week is a low probability so I should be fine. If I'm able to hold to the schedule I planned, I may add the High Sierra Trail at the end and finish in Sequoia National Park which gives me an opportunity to hike amongst the giant Sequoia trees.

After last years Condor Trail hike, this year I just wanted something straight forward where I could just mindlessly hike all day without needing to bushwhack or having to frequently determine my position with a compass or GPS. I also wanted something high reward for the effort. The JMT fits that bill as its one of the most scenic trails in the world and well maintained. If you pieced together several trips I've done over the years, then I can say I've hiked the entire thing, but never as a single trip. I did most of it as part of the PCT in 2009, but thats the longest trip along it I've done. So this will be my first thru-hike of the JMT, even though I've seen it all.