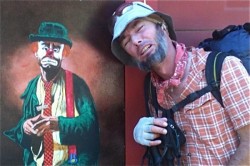 One year ago today, according to the calendar on my iPhone, which accompanied me on my journey, was Day 69 of my attempt at a PCT thru-hike. My brief notes, also tapped onto my phone that night,and recording start- and end-points, the day's mileage, campsite and style of shelter, if any, were as follows:

I recall the relief at having the worst, or most spectacular (depending on your viewpoint), of the snow-and-high-passes combo behind me; I also remember the camaraderie at Tuolumne, where I lingered for three days. I rarely left the picnic table at the store. I ate a lot, and then a lot more. Young hikers were doing appalling things with canned and bottled alcohol. I met a couple of climbers from the swinging 70s. They talked about Ray Jardine and the good times back then.

One day I began to hike out to do the 22-mile side-trip down to Yosemite to complete the JMT. But just a mile or two out, a recurrent back injury flared up and I farewelled Turbo, Shin & Tacoma and slumped back to the store and the table. Soon I was lying ON the table as a hiker with an Indian-style trail name which escapes me now - Running Bear? Running Wolf? - who worked as a therapist back in the working world prodded and manipulated my spine till it worked again. The ultimate trail magic. Next day, which with terrible timing turned out to be July 4, I tried again, playing dodge-the-day-hiker as I sprinted alone down the trail in time to make the bus back up to Tuolumne. With my side-trip to Thousand Island Lake, I'd now done the whole JMT.

I hear this year's crop of thrus are dealing with some pretty nasty/amazing (point of view, again) snow as well. Good luck to them all. Some friends from last year -Turbo and Furious among them - are actually doing it all AGAIN this year. They never got to finish last year, and being completists/masochists like me, won't rest till she's done. Me, I wasted too much time in the southern part (three days at Tuolumne?!), and long before arriving at the WA border had decided that that would be my finish line. I'd already quit and un-quit so often it was becoming a bad joke. So I have some finishing to do as well, but it won't be for a couple of years or so.

As I noted often at the time in these very "pages", I found the trail a trifle long for my tastes. I started well, but felt sapped a lot of the time in mid- and northern CA, and missed some elusive quality I'd loved on the A.T.. I made some good friends but found myself either in front of or behind them. I was freaked out more than once in the Sierra by snow, traillessness (you won't find that word in a dictionary - yet) and a couple of lethal rivers. Mather Pass still gives me nightmares. Even when I'm awake.

So I'm back here in Australia, planning my next adventure, walking a lot between stints at work, and spending much too much time reading hiking blogs and sites such as this one. I really enjoyed using Postholer last year, and met, virtually and in real life, a lot of great hikers, readers and trail angels via my journal here. If any of you are interested in yet more walking-based writing and pictures, I have my own walking blog these days, The Goat that Wrote, at:

There's stuff in there about walking in the States, Australia, Japan and Switzerland, where I ended up after the PCT for three amazing months. Hiking is central to my life and I love staying connected to the hiking community.