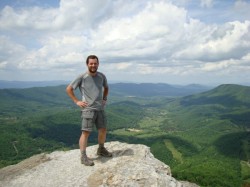 As of May 24th I am in Daleville and the weather since Pearisburg (apart from a little rain today) has been beautiful. This has probably been the best section along the whole trail with lots of different scenery, bits of farmland, Dragons Tooth, McAfee Knob and Tinker Cliffs. Have also met some really neat people the last few days. Speaking of people, lot's on the trail have been to New Zealand. I run into someone who's been there at least twice a week and they always rave about it, the natural beauty and how they want to go back...sometimes all I want to say is "SHUT UP", because of course it makes me homesick :-) Of course I don’t say that, it’s really cool to hear people talk about my home that way!

The trail recently has been quite deserted, not sure if this is because a lot of people are still at Trail Days or what, it's kinda nice, but then again it's also nice to run across people during the day. On Wed night I stayed at Pine Swamp Shelter and when I got there Bill from Woods Hole Hostel was there and I had passed his father about half an hr earlier. Bill's dad (also called Bill) was having a bit of a hard time and had just come back on trail from a week off with shin splints, looks like he may not be able to carry on. Also caught up with Martha and Paul (Mother and Son) during the day who called into the shelter and had dinner before moving on a little. I haven't seen them since Damascus. One thing that has surprised me is the number of couples and parent son/daughter combo’s on the trail, there’s a lot of them. One day I came across an 85 yr old grandfather and his granddaughter hiking the trail (thru hiking). Seems like nearly half the people on the trail are a couple in some way. Wonderful to see family active and together like this.

Wednesday was a good “Bear” day, Bill and Bill saw four and Martha and Paul saw three (mother and two cubs), I saw none, boo hoo!

Thursday night was spent at Laurel Creek Shelter after an interesting day walking through a large section of forest infested with caterpillars, many of which were hanging from a thread or just raining down on me. When I say “raining” I mean hundreds, if not thousands of caterpillars dropping out of the trees. Lot’s of them seemed to be hanging at head height from a thread, fortunately I didn’t swallow any. I did have one land on my upper lip which I swiped away at frantically until I realized it was just the moustache…

When I arrived at Laurel Creek shelter there was an older gentleman behind the shelter lying down under his tarp so I poked my nose around and said “hello”. Boy did I get a welcome. The guy recognized my accent and asked me if I was “The” New Zealander, I said I was a New Zealander and there were about 7-8 on the trail. Long story short he had seen my name in the register at the Post Office in Pearisburg and had been looking out for me. He and his wife had been to NZ 6-7 times, hiked ALL over the place and were just in love with New Zealand. I was a bit of a celebrity for a while.

Saturday might have been the best day I’ve had on the trail, sunny weather, no water shortages and the anticipation of McAfee’s Knob which turned out to be spectacular. Funny how with all the bad weather and record rainfall days that when it really mattered (Wesser Bald, Clingmans Dome, McAfee Knob etc.) there’s a little beauty of a day to enjoy the good ones. On the way up to the Knob there were about 40-50 people that I passed on the way down, all people that were hiking the 7.8 miles there and back. That’s a pretty decent hike coming straight off the couch! Anyway, not sure I can describe McAfee’s know other than to say “stunning”. I stayed up there about 40 minutes and you can see more pictures at http://picasaweb.google.com/rick.percival.

After enjoying a relaxing time on the top of the knob I wondered off to Campbell Shelter just .7 mile north. About 30 min after getting there 4 section hikers arrived and settled in the shelter. Really nice group of people, one of them (Sarah) is going to study in New Zealand at Massey University in Palmerston North. This is my home town, how freaky is that to meet someone in the middle of the American Woods who is shortly travelling to NZ (in Feb next year) and will be going to little old Palmy North? About another half hour later a troop of about 12-15 Boy Scouts arrived and put up their tents, suddenly it was a mini city. Quite a good night watching the boy scouts cook (some just eating their Ramen raw) and chatting with the section hikers about their plans for the Memorial weekend.

Didn’t sleep much this night as it is going to be my last night on the trail. I have decided to leave the trail at Daleville with one third of the trail and 718 miles of the AT completed. Perhaps I might finish the rest on a trip back one day in the future. Physically I am in excellent shape, probably the strongest and fittest of my life, including when I was a 20 yr old Infantryman. The reason I will not be hiking anymore is basically after four uncertain and stressful years living in the USA I want to go home and get my life re-started and don’t want to wait another four months before getting on with this. I have done and achieved everything (and more) that I wanted to and am going out on a major high. I am sad to be leaving but have no regrets. Thank you all for the support, it has meant a lot to see the guestbook entries. I’ll by flying home in the next few days (it’s June 1st as I write this) and am really looking forward to being home and near my family, and especially seeing my two daughters again !!

Final weight loss was 24lbs, if only I could keep it off ;-)

P.S. As per normal, the last two people I see on the AT when I call into Lamberts Meadow shelter for a privy stop have been to New Zealand.

The Appalachian Trail (A.T.) is more than 2,175-mile long footpath stretching through 14 eastern states from Maine to Georgia. Conceived in 1921 and first completed in 1937, it traverses the wild, scenic, wooded, pastoral, and culturally significant lands of the Appalachian Mountains.

I regret not the things I've done, but those I did not do.