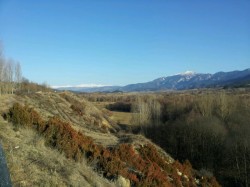 The start of another hiking adventure. This time the Appalachian Trail. For those of you who have not experienced my literary masterpieces before, the links below will take you to my Pacific Crest Trail thru hike in 2009 and my two thirds of a thru hike of the Continental Divide Trail in 2010. I’ll not repeat all of the introductory details about me and how I became crazy enough to want to spend my summers walking a couple of thousand miles – you can find most of that in the first few entries of my PCT journal. For now let’s look towards the AT which I start next week. This is one of the two entries needed to get the journal started, so I won’t bore you too much with lots of inane preparations.

So let me just talk about some differences from last year. First I have abandoned my Blackberry after more than a decade of using various instantiations of this once revolutionary, but now unfortunately becoming obsolete, device. Also, part of the reason was that although the rest of the keys recovered from the dousing it got on the CDT in that downpour in northern Colorado, the trackball was never the same. So I bought a Galaxy S2 Android that has a touch screen, a big display, an 8 Megapixel camera, the usual wifi and 4g data, and a host of other features that continue to amaze me. On top of that, I can also make phone calls! Getting used to a new way of using a smart phone has been an interesting learning experience, but I’ve had it long enough now that I’m quite comfortable with using it for this trip. Although it takes dictation, I’ve never been comfortable with this approach to composing. I get my thoughts together but as soon as I hit the record button my mind goes blank and all that comes out is gibberish interspersed with numerous ers, ums and ahs. Also, the translation of speech to text, although pretty good, still has some flaws and occasionally the translation bears no resemblance to what I actually said. Although the keyboard can be made large by turning the phone to the landscape orientation, I still can’t get my Blackberry-tuned, dexterous thumbs to work it the way I did with real keys that I could feel as I hit them. But what I did find was Swype, which allows me to just drag my finger over the glass display from one key to the next to create the word. The predictive text is very good and most of the time you only need to get close to the right letter for it to understand your intent. Another useful feature for this journal is the mirror camera so I can include myself in pictures and see the composed picture before hitting the shutter. On the Blackberry, I’d stretch my arm out with the blind hope I got my head in the picture and would have to make several attempts before I got it close enough for an acceptable Kodak moment. (I guess I’ll have to stop using that term now that the foundation of photography for the last century has gone bankrupt). I was forever getting subtle, and some not so subtle, hints that I’d take all these wonderful view pictures, but nothing with me in it. I guess everyone wanted to admire my skinny waist and my Santa Claus beard. Anyway, we’ll see how well this new smart phone works out in the field.

The other big change is that I have overcome my misguided and egotistic notion that “only wimps need ultralight” and bought some new gear. First, I have discarded my trusty Big Agnes SL2 free standing and very large and comfortable tent weighing in at 3lbs 12 oz for a Zpacks cuben fiber but almost as large Hexamid solo-plus that hits the scales at about 12 ozs. That’s not a mistype – it really is 3lbs lighter for virtually the same amount of space. I did have to get a new groundsheet as well, but this doubles up as a poncho for rainy weather so I can leave some clothing behind. It takes a little more effort to set up and needs an adjustable hiking pole to erect, but since I’m carrying them anyway, that doesn’t count in the gram contest. Second, my Deuter pack was getting a little beat up and it really never sat well - it was always skewed and many fellow hikers commented on its odd slanted look. On top of that the straps had somehow got smoother and the plastic adjustment fittings had lost their grip so that the straps were forever sliding out from their set position. When this first happened, it seemed to be an advantage because the pack wasn’t stuck in the same position for miles on end, but once it got to require readjusting every minute, it became a real nuisance. So I bought a Zpacks Exo Ultralight external frame pack. The weight savings here was from 3 lbs 11 ozs to 13 ozs plus a couple more ounces for the various extra pouches that attach to it. I have used this pack on several training hikes and I’m slowly getting comfortable with it. So, the net weight savings from just these two items was nearly 7lbs which should make quite a difference. I’m hoping to get my base weight (everything except consumables and what I’m wearing) down to just over 10 lbs. The AT has many more possible resupply points and water doesn’t seem to be as much of an issue, so overall I think the load I’ll have to carry will be significantly less.

The photos are not really too relevant – I’m just trying out the various compression ratios to see what works on this journal site. The original was taken this winter in the Pyrenees, its resolution is 3254 x 2448 and it creates a 3.3MB file which is time consuming to send and too large to put into the journal. The ones shown are various reduction options. I’m working on the best way to keep the highest quality pictures for posterity and at the same time not degrade them too badly for the journal and send them quickly so that I don't use too much battery power on the phone. On my computer, all the reductions lose a little sharpness from the original but I think the XGA is the way I'm going to go for the moment as I look these variants in the journal view.