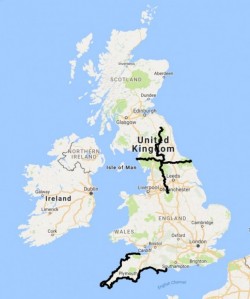 Off to the UK this Year

That hiking addiction has hit me again. The seed of the current plan germinated last year on the Camino de Santiago when an old friend and colleague who hailed originally from northern England suggested in my guestbook that I should try the Pennine Way. Since I am from the southern part of England, he joked that the only real difficulty I might find is with the language. Anyway, late last summer my wife and I visited the UK and as part of that trip we decided to drive north and go explore the area of the Pennine Way. We drove through the Peak District, the Yorkshire Dales and by Hadrian’s Wall, all places we have never seen before. The views were incredible and I immediately decided I’ve got to go hike the Pennine Way.

The Pennine Way is 290 miles or thereabouts, so then I got to thinking that it’s a long way to go for a relatively (at least for me) short hike so I looked at the coast-to-coast trail that goes from the Irish Sea to the North Sea and actually crosses the Pennine Way approximately at its mid point. That also looked a very nice route so I added that to the plan. Then we visited my sister in the south west of England and I explored some of the south west coastal path. This is a national scenic trail that goes from Poole on the south coast of England opposite the Isle of Wight along the southern coast of the counties of Dorset, Somerset, Devon and Cornwall. Then it goes around Lands End and proceeds along the northern coasts of Cornwall, Devon and Somerset finishing at Minehead. It is actually the first long section of what will become (in 2020 they say) the England Coastal Path that will capture the entire coast of England. I am quite familiar with much of south west England (I was actually born in North Devon) but it has always been seen from car trips not walking so now I added that to the plan. Overall I think all three trails combined will be about 1120 miles and I have planned April, May and the first week of June to attempt all of it. For those of you like me that are geographically challenged, I mapped all three trails onto Google Maps and then took a screenshot so that you can see where these three trails are located in the UK. I hope that helps.

I mentioned my plan to two friends who are also expats from the UK and they wanted to go on the Pennine Way section as well. So for part of this trip I will be hiking with Howard and John who I will write about in the journal when we meet up in Edale on the 16th May. All being well, by then I will be in top hiking shape so I have promisedthem that I will slow down and let them set the pace. We have scheduled three weeks for this leg which means I have 43 days for the remaining 830 miles including travel days. That’s the strawman plan at the moment but as we all know plans can change at any time.

One difference from previous hikes is that I will not be taking my gps and SPOT device this time. I now have an unlocked phone so as I soon as I get to the UK I’ll get a local sim card with a data plan included. Since the phone coverage is pretty good everywhere, I don’t think I’ll need the emergency part of SPOT and the daily “I’m OK” messages could easily be a text. I also have discovered an app called BackCountry Navigator Pro that replaces every function of the gps. I have already set up BackCountry Navigator with all of the Ordnance Survey base maps and the tracks of the three trails so I have everything in the phone such that it will work standalone in airplane mode, i.e., with no data connection. I just got back from a Hong Kong and Japan trip and in Hong Kong I spent two days on the MacLehose Trail and tested the app and it worked marvelously so I’m pretty confident this will suffice for navigation purposes given that all of the trails are well marked anyway.

I had to include some pictures so one is me on the Peak in Hong Kong overlooking the island of Hong Kong and Kowloon on the mainland. This was my annual ski trip where we went to Niseko just to the west of Sapporo. Wonderful skiing with fluffy powder almost every day. Since my old-time ski buddy lives in Hong Kong I went to Japan via Hong Kong. The two days on the MacLehose trail were really tough with very steep hills that had rock steps pretty much all the way up and down. But the views were fantastic although it was hard to find one that didn’t have a few high rises in the background. In California this winter, we have seen the drought get busted at last and where I normally go hiking on our local Nature Preserve, the wild flowers are rampant. The picture shows one area that is covered with California Sunflower bushes that for the last four years have looked completely dead. But they were dormant all that time waiting for some real rain. Isn’t nature wonderful?

So that covers the plan and I’ll post another journal when I get to England.