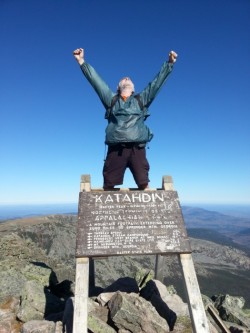 I awoke about 5:30 when Jungle Jim started packing up his gear. I felt like a little boy on Christmas morning, I tried to roll over and sleep a little longer to no avail. It was still pitch black outside and kinda cool. So I woke up Tough Cookie and we started packing up. We both made trips to the privy (a little nervous energy)! We started up the trail about 7am and signed in the trail log. There were 3 groups ahead of us including Hobo and James. James is a friend of Hobo's who had come up to hike Katahdin. The trail up Katahdin starts out rather pleasantly for a half mile or so. But then it begins to climb a little more steeply paralleling Katahdin Stream. You hear the sounds of rushing water and then you reach Katahdin Stream Falls. The trail then bends to the right away from the stream and you begin a more steeper climb. There is a series of stone steps. I felt like I was in a zone, climbing effortlessly. As we got higher the trail got much steeper. We were still below tree line and the rocks on the trail became much larger. We stopped and I folded up my poles and I put them in my pack. We hung Tough Cookies' poles on a tree since hers don't fold up.We climbed a little further and soon started passing larger and larger boulders, but we were still below tree line. When we finally emerged from the woods and were above tree line, we were along a ridge line with boulders everywhere! We could look up the ridge line to see where we had to go and we could even find specks of the other hikers ahead of us. The weather was perfect! We had crystal clear skies and the Maine wilderness looked amazing! Climbing through the boulder field was actually quite fun although there were some incredibly dangerous spots. Every time I looked over my shoulder I was amazed to see Tough Cookie was right on my tail. She had the biggest smiles and was having a lot of fun too. At one point we actually lost the trail briefly and took an even more dangerous route for a short time. But we soon reconnected to the trail. This was more like rock climbing than hiking, but without the advantage of rock climbing equipment! We then reached an area known as The Table Lands. This area has a much gentler slope. We passed Thoreau Spring which was frozen so we stopped to break off ice chunks to suck on, just like popsicles. The Table Lands are over a mile long and due to their gentler nature, I had time to think about my whole thru-hike. I started to get a little choked up but I fought it off and kept heading towards the sign. Before you get to the summit you have to climb one more steep area that was very rocky and required some tricky footwork. As I approached the summit sign I could hear the other thru hikers who had already summitted, chanting my name and applauding! I reached the sign and gave it a giant hug! I had hiked the entire 2185.9 miles of the Appalachian Trail from Springer Mountain in Georgia to Katahdin in Maine in one hiking season, 6 months and 1 day!

We took the traditional summit pictures on top of the sign. Shortly after we summitted, more and more thru hikers followed behind us to summit as well. Before we knew it there were about 25 thru hikers on top of Katahdin celebrating altogether! The atmosphere was indescribable. We had many thru hiker hugs, group pictures, videos, and lots of champagne, wine and Jack Daniel's for everyone! We actually had to monitor our consumption because we still had to climb down. Our decision to delay our summit an extra day, in order to wait for better weather, really paid off. I did not know every thru hiker up there but I did know over half. Among the thru hikers there were Hobo, Walking Stick, Hipsy Gypsy & Oak, Cheech & Chong, Jungle Jim, Tangy, Guru, Flat Foot, Limey, Sly Fox, Munchies, Queen, Green Lite, First Gear, Nomad, Snakebite, Little Spoon, Chuckles, Doc Spice, Bison, Danger Pants, and Wal-Mart. There were also section hikers like Tough Cookie, and day hikers. We stayed up there celebrating and keeping the experience alive for as long as possible. Knowing the trip down would also be challenging, we headed down after almost 2 unforgettable hours on the summit.

It took about 3 hours to descend. There were places and things we passed on the way down which we hadn't noticed on the climb, due to our excitement and adrenaline rush to the top. When we reached Katahdin Stream campground, I had to register with the ranger as an official thru hiker! We met Hobo and his wife Anita, who'd just arrived, in the parking lot, and then waited for the others to get down so we could go celebrate in Millinocket.

I plan to do 2 more entries, one with my reflections on my hike and one with Tough Cookie.

One Step At A Time