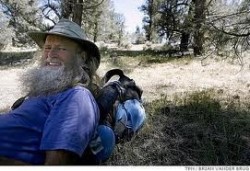 From the Los Angeles Times, an article about the legendary Pacific Crest Trail hiker - "Billy Goat."

"George is the name my mother gave me," he said.

Billy Goat has hiked more than 32,000 miles -- which would have taken him around the world and a third of the way again. He has walked across the South and the Southwest, the Northeast and the West. He has crossed the Rocky Mountains on four occasions, twice in each direction. He has conquered the so-called triple crown of American hiking -- the Appalachian, Continental Divide and Pacific Crest trails -- multiple times.

He has a wife, his third, and a home in Nevada. That is where George, the 69-year-old retired railroad worker, would live if Billy Goat cared to be George. Billy Goat lives more than 10 months of the year outdoors, drinking unfiltered water from streams, eating vacuum-sealed meals he prepares himself, sleeping under the stars without a tent. He carries what he needs in a backpack weighing less than 10 pounds.

"I'm not on vacation. I'm not out for a weekend," he said, settling in for the night under a fire-scarred tree next to a gurgling creek and surrounded by the rugged granite outcroppings of the Dome Land Wilderness. "This is where I live. When you do that, all the other trappings of life fade away."

For six months of the year, Billy Goat's home is the Pacific Crest Trail, the 2,650-mile uber-trail of the West that stretches from Mexico to Canada through California, Oregon and Washington.

He is a legend in the small but growing fraternity of ultra-long-distance backpackers, renowned for his stamina and trail knowledge and envied for a single-minded devotion to living outdoors. First-timers on the PCT inevitably hear about Billy Goat. They spy his signature entry in trail-head logs -- a red-ink stamp of a goat. Chance encounters are described in awed tones in Internet journals.

I met the most extraordinary man just two days ago. . . .

"He's the heart and soul of the PCT," said Monte Dodge, 50, who hiked the length of the trail when he was 19 and does a portion of it nearly every year. "It's his wisdom, his longevity -- the whole package. He's a modern-day John Muir."

The resemblance goes beyond the hawkish nose, determined eyes and gray beard that Billy Goat hasn't tended in 13 years. Muir spent months at a time wandering the Sierra alone, carrying little more than a blanket, bread and tea as he developed his philosophy of the restorative power of nature on the human spirit.

"Thousands of tired, nerve-shaken, over-civilized people are beginning to find out that going to the mountains is going home," Muir wrote. On another occasion he observed: "Nature is always lovely, invincible, glad, whatever is done and suffered by her creatures. All scars she heals, whether in rocks or water or sky or hearts."

Billy Goat has never read any of Muir's prose. But more than any scholar, he understands through experience what Muir meant.

They head north each spring from a sun-baked wood marker in eastern San Diego County a few feet from a corrugated-metal wall along the Mexican border.

An encampment of Minutemen, a citizens group that patrols for illegal immigrants, surveys the area from a nearby hill. The only sound is the clink of small metal squares attached to a fence paralleling the border that are engraved with messages denouncing illegal immigration. "This is sovereign America," one declares.

The writings contained in a log book at the PCT trail head glow with anticipation. "It's like my life is beginning," one hiker hoping to make it to Canada wrote. "Scary, new, awesome!"

Each year about 300 people attempt to hike the PCT in one season, generally April to September. Of those, about 60% make it -- fewer people than scale Mt. Everest in a year.

It's a grueling odyssey through the stratum of the American West. From broiling deserts near sea level to snow fields above 14,000 feet. Along rocky ridgelines and through rain forests. Across swift, frigid streams and plunging canyons. In California, the trail zigzags through the Mojave Desert, the Sierra, Yosemite National Park and the southern Cascades

Planning a Pacific Crest expedition takes longer than the journey itself. Timing is everything: The desert must be crossed before it becomes dangerously hot, while the window for traversing the Sierra's snow is relatively narrow. A steady pace must be kept -- 20- to 25-mile days are the norm. Daily life is rendered primeval -- food, water, shelter and miles are all that matter. Small-town post offices and other resupply spots constitute stations of the cross for weary hikers.

The Pacific Crest Trail (PCT) is a 2,650-mile national scenic trail that runs from Mexico to Canada through California, Oregon and Washington. The PCT traverses 24 national forests, 37 wilderness areas and 7 national parks. The PCT passes through 6 out of 7 of North Americas ecozones.

If you are prepared, you need not fear.