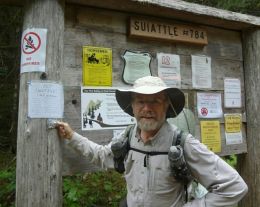 In 2013, there was sufficient time available to start at Campo at the Mexican border and reach the mid-point near Chester, CA. 2015 afforded time to complete the trail. However the Blankenship Fire and a host of other fires in northern Washington shut down the trail with just over a hundred miles to go. As disappointing as that was, it was not as crushing for me as for those who stood to finish the trail in one go.

Being such a goal driven person, there is clearly an element of completing unfinished business. However, the intervening time over three years has given me opportunity to reflect and appreciate the journey is at least as significant as the goal. The journey is certainly most memorable. The interesting people from all backgrounds and many countries, the truly amazing scenery, the time alone with God, the time with people, the fun times, the challenges, the joy of living in the wild, occasionally on the edge of survival, an almost nomadic, hobo-ish existence. For the most part being untethered from instant communication and the noise generated by the hustle and bustle and pressures of the modern world.

Did I mention the people? I have come to highly respect anyone who thru hikes the trail in one season. Not only does it take serious determination to put in 20 miles per day average over 4.5 months, but there are countless things that can and do go wrong, from sickness and injury to losing the mental battle to fires and snow storms. In many ways, it's even harder to finish it over multiple years, especially those hardy souls who hike it in sections over decades. They may never travel far enough each trip to truly gain their trail legs and reach full conditioning. Each trip is almost like starting over.

The people are so much fun and so interesting. The rigors and challenges of the trail acts as a great equalizer. I've hiked with the unemployed, truck drivers, construction workers, engineers, teachers, doctors, executives, soldiers, officers, and on and on. On a daily basis we're all thinking about where to get water, if we have enough food, where we will sleep. We get blisters. We struggle with injuries and bad weather. We hitch-hike trying to get rides. In the end we are all just a rag-tag group of hikers with funny trail names pressing on to reach the goal. Age, gender and position in life make little difference.

I'm amazed by the number of people who come from other countries to hike the trail. Besides the obvious language and visa issues, the logistics challenges are huge. Many countries lack the availability of suitable gear and importing it can be difficult to where some people don't buy their gear until they arrive here, which gives them like zero time to break it in. Taking a backpack full of trail gear on an international flight must be more fun than I can imagine. And then there is the challenge of shipping resupply boxes. It's almost impossible without having a friend here in the states. Yet I've met people who speak no English and apparently have no state-side connections. Somehow they pull it off.

Having been on the trail for two seasons I've had the pleasure to literally meet over four hundred people (really, I wrote their names down). I've managed to stay in touch with a small subset and wish I had paid more attention to this aspect of the trail.

The journey is incredible.

So what about 2016? Well, the plan is to travel by car, train, bus and hitch hike back to the Suiattle River trailhead and resume one calendar year later. The trail head is pretty much in the middle of no where, so it will be a project just to get back there. Once there, it will be a few miles to reach the junction with the PCT and then about two days to the town of Stehekin. Stehekin is famous for its bakery. After 2,500 miles of hiking, it's reputed to be a darn good bakery! From Stehekin it should take about six days to reach Manning Park in Canada. Then a couple days of bus, train, car to get home. The hiking distance is short enough that it hardly seems worth getting in full hiking condition for. So my training routine is way less rigorous than last year and I'm only targeting 15 miles per day. I'll just have to reign in the ponies when the thrus go flying by. Oh well, that will just allow me to meet more people.

Thanks for following along and I hope to resume the journey in less than a month. Links to my 2013 and 2015 journals are at the bottom of the entry.

Yum. Just cooked up a batch of Logan Bread with dried blueberries, cherries and raisins. Oh, yeah, the huckleberries along the trail should be ripening! I can still taste that huckleberry milkshake at Trout Lake.