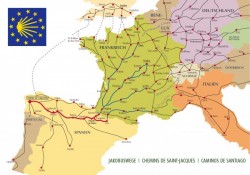 Earlier this year my friend Milky (aka 'Jim') made plans to hike the Portuguese Camino this Autumn, and I jumped at the chance to hike it with him. He and I met when thru-hiking the PCT in 2008, and since have hiked part of the CDT together, part of the AT together, and we hiked the most popular "Camino Frances" route of Camino de Santiago together, along with our mutual friend Lucky. I've actually hiked that (Camino Frances) 500 or so mile route twice, the first time with my wife --- and enjoyed it a great deal both times. The Portuguese route is less well known and travelled but I've read a lot of good things about it, and am looking forward to it.

My sense is that the majority of people who hike this route start in the Portuguese city of Porto and hike north to Santiago de Compostella in Galicia (Spain) --- the same end point for the much more popular Camino Frances route. Milky and I are doing the longer version that starts in Lisbon. This is supposed to be about 620 kilometers of walking, or roughly 385 miles. We'll continue from Santiago at the end to once again hike to Finisterre, doing a Finisterre and Muxia circuit and then I think walking back to Santiago. Our total mileage should be a bit over 500 miles, for which we've budgeted about 5 weeks or so.

In theory I've been practicing my Portuguese to get ready for this --- by which I mean trying to learn a few words but mostly adjust my pronunciation and adjust my ear to understand so very many similar-to-Spanish words in the language. In practice, I've been busy with other summer adventures and have done almost none of this, but fortunately people assure me that one can get along just fine in English. I've heard mixed messages about trying to use Spanish in Portugal; the languages really are quite similar (in print at least ...), and they're neighboring countries, but some people have suggested that using Spanish there will likely endear me less to Portuguese people than will using English. TBD.

Just based on trying to pick good and less-expensive flights I'm flying first to Madrid, where I'll take a couple of days to get over the worst of my jet lag, then take a short local flight to Lisbon where I'll meet with Milky. Or perhaps I should just be calling him 'Jim', as trail names aren't anything that folks know much about on European pilgrimage walks. Anyway, he and I will take a couple of days in Lisbon to look around and then actually start hiking on Friday Sept 15th.

I've got the 2016 Brierly guide to the Camino and Milky just got the 2017 version, plus I think we both have the "Wise Pilgrim" app, which provides a map with the route along with information about accomodations, etc --- though we've read that the app is somewhat buggy. Being an "always prepared" kind of guy, I'll put backup maps and route info of some sort. I expect that the route will mostly be easy to follow, but even if it just makes it easier a time or two, I find it reassuring and worthwhile to have GPS-connected map data to consult at need. I'm thinking that I'll carry roughly 14 pounds of stuff on my back, not counting relatively minimal food and water carried, so that should be nice.

While it's called the "Portuguese Camino", it ends in Spain (province of Galicia). Hiking from Lisbon, one would normally do roughly 80% of the hike in Portugal and 20% in Spain, but since we're adding over a hundred miles in doing our to-the-coast-and-back loop, it will be more like 60% in Portugal and 40% in Spain for us. Hmm, that much less of a priority to work on my Portuguese then! :-)

I hiked 300 miles on the PCT in NorCal with my friends Carl and Ed in July/August, so one would think that I'm in pretty good hiking condition, but I've not done all that much walking since then. I had planned on doing local walks in my last week or so, but two major fires in Washington state has left our air quality low enough that I'm disinclined to do outdoor activities that involve extensive deep breathing. Hopefully I'll be up for it once we get started!

The photo for this entry shows various pilgrim ways in Europe, with the route for this trip being the furthest west of those. Starting from just over the French border near RoncesValles, the heavy red line that runs east-to-west shows the Camino Frances. You can see that there are many pilgrim routes; when in Italy, my wife Ann and I walked just a few days of the Via Francigena in Tuscany, a bit north of Sienna on that image. A lot of French, German, and other hikers hike the Camino Frances but start farther to the east --- that would be fun to do some year too. Note that the source of this particular map is German, hence France is "Frankreich", etc.

I'm looking forward to hiking with Milky again, and experiencing what Portugal has to show and teach me along the way.