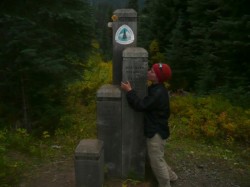 This morning started off well, with a light climb up to the Devil's Backbone (not that devilish, really...with a name like that, I was expecting some tough terrain, but it was just a nice little ridge), followed by a light descent down to Holman Pass, where I took a morning break and got caught by Good Times. We climbed another 6 miles to lunch, just below Woody Pass. This morning felt really good- I loved the hiking, and the scenery was stunning. It has been colder the past few days, and the leaves are starting to change color on the groundcover foliage, so there is a great combination of colors: the darker fir trees, with the lighter shrubs and the bright red and orange groundcovers. Just before Woody Pass, the trail crosses over a pass that is almost as high as Woody, then drops down about 500 feet, cross a talus slope and reclimbs the 500 feet on the other side, rather than pass where the old trail used to go, across a rock face at the top of the rockslide. It was a little nerve-wracking crossing the talus slope as it was, with a big drop to a creek valley, and a large outdoor adventure group passing me in the middle of it. I would have been even more nervous if I had reached the first pass when Good Times did: he saw a huge piece of the rock face fall off, causing a slide down a chute towards the trail that he was about to walk on. I'm really glad I didn't know about that until I caught up with him on the other side.

From our lunch point, it was 4 miles of walk along a ridge to the last high point on the trail- the top of a peak on the ridegeline, with an amazing view of the North Cascades, all snow-covered with clouds moving in. It was 3 pm when we got there, and we knew we only had 9 miles to go to reach the border. We had previously talked about not going all the way there that night, camping 4 miles before it, and hitting the border in the morning. Naturally, the desire to finish kicked in, and we decided to go for it. The last 9 miles were all downhill, easy terrain, and fast-going, especially with the knowledge that the border was so close. I was thrilled when I reached the pass just 4 miles before the border and saw a sign on the tree. Rather than what all the previous signs had said, giving direction to lakes, passes, wildernesses, or roads, this one just said "US Border" with an arrow. Finally, I reached the first switchback, which showed a view of a straight line, about 20 ft wide, where all the trees and brush had been cleared: the border. I knew from talking with other hikers that the border at the point where the trail crosses it just sort of appeared out of nowhere from a series of switchbacks, but I thought it would be much further, several switchbacks down. Looking at my watch, there was no way I could have done 9 miles in only 2 hours and 15 minutes, including a stop for water. I kept walking, thinking I would be at least an hour from the border. To my surprise, in only 15 minutes, I came around a switchback and saw the sign for the border. Walking out of the tree cover, I saw the border monument and the PCT monument. I was there.

It is impossible to describe how I felt at that moment, but I'll give it a shot. I felt elated, like nothing could possibly be better. The first thing I did was to run up and hug the PCT monument. I was so happy just to be there and to have made it. With that happiness came an overwhelming sense of not knowing what to do next- I have been aiming for this one goal for the past 5 months, now what do I do? As soon as that thought had entered my head, though, it left, replaced by joy at just being here and shock that I actually did it. I had been telling myself for so long that I wouldn't be sure I would make it to the border until the day I actually crossed it- so many people who when I met them at the beginning, I thought they would make it for sure, have dropped off the trail due to injury or simply not wanting to hike anymore. There was never a guarantee that I would make it there, so it really was almost a surprise to me when I did. I sat and just stared at the monument as I ate my celebratory bag of Nachos Doritos. As I was sitting there, it started to rain lightly, so Good Times and I both packed up quickly and took off for the campsite we had heard was just past the border. We came around the corner and saw smoke from a campfire rising, with several of our friends sitting around it. What a perfect way to spend the night after the border: with friends and a campfire.

Unfortunately, it started to rain more heavily throughout the night, and mice were rampant in the campsite, so after a sleepless night, we took off early in the morning to try to get to Manning Park Lodge. There are two routes one can take out of the PCT: the first is a trail that leads over Smoky Joe, a 1000 ft climb,but a well-graded one, apparently. The second, and the one that Good Times and I took, is a maintenance road for the border that leaves from behind the horse corral at the border campsite. It is flat, and a shorter distance to the highway. It was fun, as a last day, to take a trail that wasn't as well-maintained as the PCT. I waded through wet grass, scrambled through a washed-out section in a river bed, and followed signs to a parking lot, hoping they would lead me to Highway 3, which led to Manning Park Lodge. Happily for me, they did, and I reached the parking lot and the adjacent highway in 2 1/2 hrs. We hitched up to the lodge and met up with our friends there, as well as a few others who had come in the day before. It was strange, sitting in the restaurant, to realize that this wasn't just another town stop- the trail had ended, and I was "in town" for good. I felt funny, it was odd to think that my next step was to go to Vancouver, not to get a hotel room, shower, resupply and keep hiking.