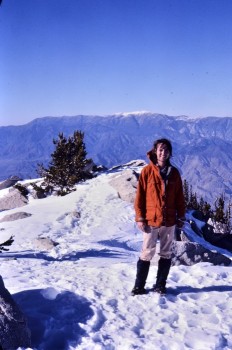 All over but the hiking part

My pack is packed, my resupply boxes are ready, the bills are paid and it's almost time to head out to California. I'm hoping Vail Pass will be drivable as I took my snow tires off yesterday. In contrast to drought-ridden California, we have been having a steady succession of storms since February that shows no sign of abating.

My plan is to hike from Idyllwild to Walker Pass starting April 8 and finishing around May 10, in time for my daughter's graduation from Pitzer College. That will be the end of the tuition-paying phase of my life, one more responsibility shed and thus another step toward freedom, at least as much as we can ever be free. Or perhaps its just a step toward a more-refined state of self-indulgence. Hard to say.

This trip will connect two very different phases of my hiking career. Last year I hiked the 150 miles from Lake Morena to Idyllwild (Fobes Saddle, to be precise). In 1976 my brother and I started out from Walker Pass, intending to hike the PCT to Lake Tahoe. I think the trail was in a very different place then - the climb out of Walker was straight up a cattle trail, but finally topped out in a nice forest. The second day out I was getting water from the creek and felt a ping in my knee, like a string bering plucked, and my knee began to swell and stiffen immediately. Walking was excruciatingly painful. Especially postholing over Forrester Pass. But it was beautiful, and nearly deserted. I don't think we saw half a dozen other hikers in that stretch. We made it as far as Kearsarge Pass/Onion Valley before I finally gave up and went home to have my knee operated on. After that, responsible stuff like college, grad school, jobs and family limited my hikes to no longer than a week at best. But the kids are grown, my last company went bankrupt, and my wife doesn't seem to mind me being gone for a month. So its best to do this while I can. There is not another 40 year window waiting for me out there.

I hiked a lot (and built some) of the trails in the San Jacintos, San Bernadinos and San Gabriels as a Boy Scout and teenager that are now a part of the PCT that i'll be walking. I haven't thought of these places for decades, and I suspect they will evoke some long-forgotten times and friends. So this trip will be in some respects a walk back in time for me.