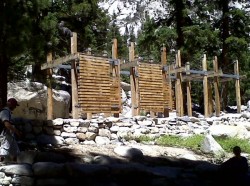 We woke up at 6 and was on the trail by 6:45. On our way down we can across all kinds of people they where ether summit Whitney or going to camp out at outpost camp or trail camp. My left knee stated to hurt slowing us down. We reach Whitney Portal around 11:30 to my relief our car was this there. I fear for what ever reason it was getting towed. We drop off our pack at the car and got some clean clothes to change into. We went to Whitney Portal store had a burger and hot showers. We meet up with John and Casey had a nice time talking to them and other that had finished the JMT. Around 2 we pack up John and Casey packs in our car and headed to Mammoth Lakes to pizza and pie. After Mammoth we dropped them off at Lee Vining so they can hitch a ride to Yosemite. We said our goodbye at the gas station and headed our way home. After we pass Lake Tahoe we pick up a PCTer found out latter he was hitching the wrong way. We drop him off at Pollock Pine and gave him the rest of our food and fuel. Some one stole his flee jacked, so I gave him the one I had gave him my address and told him when he get the money to send me for my flee. That ended a wonderful trip.