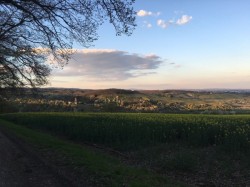 I've been reading, and nearly everyone I've read had a blog prior to, during and after their PCT run.

I was thinking about this oddity, then it sort of creeped up on me why this should be so.

Anyways, about me and why I will be doing something normal like hiking the PCT. I work in a cube farm. I hate it. When I began this career it was with the expectation that I would definitely not be cubing it up. However it was fated to not be so, so now I find myself in a job that frequently extends to 10-12 hour days, random weekends and the distinct possibility of sudden work trips to...desert locales around the world. Joy. I am however a contract worker, so I've decided to call it quits once my contract is up.

As I judge myself and my own skills I find that I have none that I would deem valuable. I'm not a mathematician. I can't make coffee on an industrial scale. I've never actually cooked a hamburger or steak on a grill. I can, however plan and analyze, canoe and appreciate scenery. It was with these meager few skill sets that I will set off with into the world once my contract is up. My memory has never been the best and so to reinforce this flaw (or blessing), I decided that now was the time to finally finish a grand wilderness adventure, of the sort that I'd always dreamed of. You know, before returning to the drudgery of the cubes.

Unfortunately for me, my friends are not canoeists, and those that are will probably be unavailable to make a Minnesota-to-Hudson's Bay trip with me. I regard myself as a good canoeist, but the thought of tackling serious rapids solo is not something that I relish, and due to the remoteness (trust me, the possible routes are seriously remote) of the terrain, I'd be best served with picking an alternate if I hoped to return.

The AT appeared first in my thoughts. I've known a thru-hiker (who, prior to his trip regaled my friends with a dramatic reading of Bill Bryson's "A Walk In The Woods") and it seemed like a good idea. The more I read however, the less the AT appealed to me. Its not just the number of other hikers on the trail, it was the nearly constant proximity to civilization that I was concerned about.

Next the PCT came up. I've been to the top of Mt. Whitney (It was an awesome, if lung-crushing, head splitting, and mind boggling day hike with no acclimatization). I enjoyed Whitney so much that I did a quick day walk up nearby Mt. Langley (if you've been on the PCT, this 14'er lies between Whitney and the Golden Trout Wilderness). From both of these trips I came back with a lasting realization that the Sierras are the best place on the planet. I've been longing to return from the moment I left. Reading Cheryl Strayed's "Wild" certainly cemented the thought, as I'm sure it has for most other people, but as the saying goes, I want to hike my own hike.

So why southbound? I would like to begin my hike as soon as my contract is up, which means that June 2017 is the earliest. Right away I tossed out the notion of doing a NOBO flip-flop because I want the continuity to be maintained throughout. AT and CDT are also probably out, though I should really check when the SOBO routes become viable for those. Other aspects of it are appealing as well. The probable snow start, fewer hikers and no absolute rush to beat early snows had their roles. I should say in full disclosure that hiking out of forest into desert is...not as appealing as the alternate. I do love deserts dearly, however, so its not that bad.

I'm currently doing my gear, food and schedule research and i'm looking forward to the day that I can start. As an interim, I'm planning to start walking to work instead of driving. Should be a great time and an epic adventure. I'm looking forward to meeting others, talking and sharing a fire.