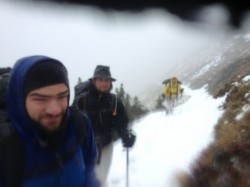 End of the Line

It poured all night long and I had a miserable time trying to sleep. I still felt sick to my stomach and didn't feel like eating anything but I forced myself to eat a bar before crawling out of my tent into the rain. We were all pretty damp but were making the best of it. We hiked on in the rain for a bout three miles before we crossed Brush Creek on a bridge and passed a possible low altitude escape route. Everyone was feeling fine despite the rain and we agreed to start making our way up the next pass, where we would be totally exposed on a ridge for over ten miles before reaching the outhouse at Hart's Pass and a possibility of shelter.

As we climbed, the temperature dropped steadily. My feet were completely soaked and very cold from sloshing through the icy slush pools in the trail. We made Granite Pass at 5000' and the rain began to turn to sleet and then wet snow. Long switchbacks slowly crossed the mountainside and the wind began to blow. Scallywag & ED's rain pants had torn and were useless. I was getting cold but as long as I was moving I was okay. I shuddered to think what would happen if anyone was to slip and get injured, even a sprained ankle could be big trouble here. We climbed and climbed as the snow began to fall in earnest. We reached the top of the ridge a little over 7000' and now it was getting quite cold and windy. There was actually a cornice on the ridge and several times it was hard to tell which way the trail led. I was in front, stopping often until the others came into view, which was causing me to get pretty cold, my feet and hands were getting very cold and I was starting to worry. If I could keep moving at my own pace I knew I could stay ahead of it but I was having to slow my pace to stay with the group.

We reached an open area with a couple of scrub trees to hide behind and we regrouped. I was shocked to hear Typo tell me his hands weren't working well enough to open a ziploc bag! Scallywag was very cold as well and ED was in rough shape, her legs bright red under her shredded plastic rain pants and she couldn't zip up her rain jacket. I was cold with poly leggings, shorts and goretex rain pants on, I can't imagine how cold she must have been. I was so shocked to find out that my entire party was in a bad way and I angrily asked the others "What the hell you guys, why didn't you say you were getting cold?" Now I was getting scared. I then realized that I'm hiking in very marginal early winter conditions with a Kiwi, a gal from Florida and a guy from Southern California who haven't gained experience in this kind of weather. I gave ED my dry pair of gloves and my dry fleece and even pulled out one of her cigarettes, stuck it in her mouth and lit it for her - she really needed a smoke right then - lol. I heated up some water and made two bottles of warm drink for everyone to drink and wrap their hands around. Finally, I pulled out my package of sliced salami and handed out a wad to each of my friends. I was now very cold from standing still with my gloves off and I had to move NOW!

At this point my biggest fear was the wind picking up causing a whiteout. Two of us had GPS units but the reality of standing in the wind trying to navigate getting colder by the second was daunting, never mind the very real possibility of stepping off of the trail. We had seven miles to go to reach the relative safety of the outhouse at Hart's Pass, but all of it above treeline. We continued on, not stopping for anything. The snow continued to fall the entire time and the trail was getting drifted over in places. I tried to act positive, I think my friends thought I was crazy when after stopping for us to regroup at a switchback they realized I was listening to Van Halen on my iPhone over the speakers. I pretended I was fine and that everything was under control, but I was lying to myself. We were still moving together but I had used up my safety net of dry gloves, hand warmers and spare jacket helping ED and I wasn't looking forward to another night in an outhouse. A small voice inside me was saying "don't stop - just keep moving as fast as you can, the others will keep up" but we had agreed to keep together so I'd wait until I could see the next hiker and then continue.

Yes, I could still just stop and hunker down in my tent but my tent and other gear was sopping wet from the rain - it would have been miserable. ED was camping under a tarp and would have really been in trouble had we needed to stop and camp up here on the ridge. In my mind our best case scenario now was to reach Hart's Pass and then hide in the privy taking turns trying to flag down a random hunter with a four wheel drive to take us back to Winthrop, 33 miles down a steep, rocky dirt road. If we hadn't been completely drenched by the rain the snow would be much less of an issue but there was no way we could continue 38 more miles from here without getting dried out.

We came across some fresh foot prints and saw that Waldo had indeed left the food up here for us, driving his rental car up to the pass in the snow! He also left us a 12 pack of beer, presumably for border celebrations. We grabbed the food and beer and hiked a few more yards to the road at Hart's Pass. A pickup truck drove up to the pass and then turned around. I waved him down and asked if they were headed to town. They replied, "No, were camped down the road a little." I asked if they had seen Waldo's car and they had seen him driving up the hill toward the pass not long ago. We inspected the outhouse and it was grim. It only had one side and the floor was absolutely filthy. Typo decided to walk up the road a bit to see if perhaps we hadn't missed Waldo. Sure enough, moments later here comes Waldo! I could not believe it - the likelihood of all four of us getting a ride to Winthrop from this spot in a snowstorm was virtually nil. There was no way all four of us could have fit into the outhouse and it was getting very cold. I thought of Wolverine and my heart sank - where was he? Waldo had come up to check on conditions at the pass and see if we were here and now he was going to take us back to town. Scallywag and I each opened a beer a to celebrate our incredible luck. To go from facing a long cold, wet night in a toilet followed by who knows what trying to get back to town to sitting inside a warm car drinking a beer was a little bit more than my brain could handle - I tried to make a video in the car to capture the moment but I could barely speak. I made up my mind right there that I was done, I had nothing to prove and it was time to go home.

The drive back was long, Waldo said that the conditions further up the road where the PCT leads were terrible, with blowing and drifting snow. Just a couple thousand feet made all the difference in the weather, there were even patches of blue sky. We got to town and tried to rent the lodge again but they had just filled up. We found a place that had laundry and invited Waldo to join us. We went to town and had dinner at a Mexican place, the waitress asked, "Are you guys having some sort of a beard contest or something?"

After dinner we stopped by the pub next door where Dancing Feet & company were meeting up with with her in-laws C.J. and Marty. There was a great duo playing but the noise and chaos was more than I could handle at that moment so I went outside for some air. Out front, I met C.J. and she mentioned that they were going back to Seattle tomorrow afternoon and I asked if I could possibly get a ride. She said her and Marty were going that way anyhow and they'd like the company. C.J. and Marty had brought lots of cold weather gear including snowshoes for people to borrow. Dancing Feet and the gang were going to try again later tomorrow, and Scallywag decided to join them. Marty and CJ would drive them up to the pass and if it looked ok, they would go for it as a group.

Typo headed back to the room, he had decided to try and give it a go very early tomorrow morning with Waldo. The forecast was for more snow, but up here the forecast is useless. Despite milling it over in my mind for quite a while, I was sure I wasn't going back to Hart's Pass with the gear I had. Without a pair of boots (instead of my lightweight trail runners), some warm mitts, my winter sleeping bag etc. I just couldn't see 38 more miles in similar conditions and again if we got in a whiteout the trail would be lost instantly. There are no roads from Hart's Pass to Manning Park and the trail remains at 7000' for most of the way to the end. My body was exhausted and my mind was dulled - I knew for sure that I was headed home.

Back at the room I loaned Typo my two pair of gloves, a dry bag and a couple other items and he asked for some advice on winter travel. He assured me that he would be wise and turn back if the pass looked bad. Waldo was an experienced winter hiker and very strong so I knew they would be a good team. I wished them the best and gave Typo a hug and thanked Waldo for coming to help us. I went to bed but my mind was racing and I couldn't fall asleep until almost 4am.