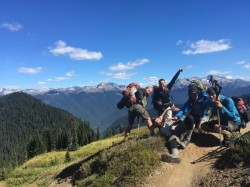 I am so incredibly happy to have had the opportunity to experience this epic adventure. The PCT was the adventure of a lifetime, but I'm struggling with what to say to wrap this whole thing up. I wish I had come to some big conclusions about life through this journey, but I feel more confused than before. Maybe it's because I'm only half settled back in. I'm back home and working, but waiting to move until after the holidays. This post trail depression stuff is real, and hard to explain the feeling. I miss my trail family, the lifestyle, and having a purpose. I knew the veiws I was seeing everyday were incredible, but now when I look back at them I get somewhat of an overwhelming feeling, that I cannot believe how beautiful it really was.

Since returning home, I've gotten to do all the activities I missed while on trail. Starting with the Bourbon Chase, a 200 mile running relay through Bourbon county in Kentucky. Then, the Hilly Hundred, two 50 mile days of road biking and camping in Indiana. Followed by my favorite, birthday camping and rock climbing at Jackson Falls in the Shawnee National Forest in Southern Illinois. I've been riding my motorcycle everywhere, and spending all my time with family and friends. It's the relationships in life, and sharing experiences that are the most special.

In conclusion, I will finish this story how I started it. Answering the top 10 questions I get post-trail:

1. What was your most memorable moment?

There were so many memorable moments over the course of this 5 month long journey, it's very hard to pick just one! Probably the most shocking, disgusting moment stands out. That time in stepped in poop.. the second day in a row. (The story is in my post from mile 2390)

"Today was awesome and beautiful, but something happened that really disgusted me. This afternoon, after stepping off the trail for a second, I seem to have stepped in what appeared to be human feces (judging by the toilet paper surrounding it). If you find yourself going out into the wilderness, please please please, practice Leave No Trace and burry your waste. A hole should be dug at least 6-8 inches deep."

"So that awful thing that happened yesterday, it happened again today. We were next to Mirror Lake, and there were lots of day hikers around. Some of them stopped to ask questions and observe the thru hikers. It made me feel a little like zoo animals. Especially after I came down the hill, after having stepped in poop for the second day in a row, in somewhat of a rage, throwing a big rock into the lake. They probably thought "uh oh, that one's lost it". I didn't care though, it was probably the most upset I've been on the trail."

2. Did you have a favorite section/hardest section?

I loved the high sierras, especially hiking over Forrester Pass and into Kings Canyon. The hardest section for me was northern California. My feet were not having it, and I switched shoes in hopes of making them happier, but they did not get along. I ended up with very sore feet and blisters worse than when I started. Just putting the shoes on hurt. I could no longer keep up with my trail family, and found myself limping along just trying to get to the next town for new shoes. When I got to Mt Shasta, there was an outfitter, but no shoes that would be any better than what I already had on my feet. I did switch insoles which may have helped a bit. Then, I got to Etna, nothing... I decided to order shoes to be sent to Ashland, which was still almost two weeks away, but I did not want to risk being dependant on what shoe stores were available. When I got there, they had not shipped besause an emil was sent while I was on trail to confirm my shipping address.

3. Did you hike with the same group the whole way?

I met Bamboo, MK, Mash, and Shaman at Scout and Frodo's the night before starting the trail. Our paths crossed so often those first few days, I began hiking with them. They got to the town of Warner Springs the evening ahead of my arrival the next morning. They all wanted to leave that afternoon, but I had town chores to take care of. In order to do both, hike with them and stay in town for the afternoon, I lobbied for them to take a zero. I was successful, with some careful negotiating and an extra tent set up. This, then gave me my trail name, "The Lobbyist", and I continued to hike with them until my foot issues in Northern California. Along the way, our family grew to include Double Down, Knees, Torch, Blondie, On Point, and Data. I hiked Northern California and Oregon solo in combination with new friends and my brother before our group all caught back up in Cascade Locks. We then hiked all of Washington together, finishing at the Canadian border together on September 18th.

Though I was with a group most of the way, most of my hiking time was by myeslf. Each evening we would decide how far we were going the next day and plan to meet there. A lot of times we would break together throughout the day, but almost always had dinner together. This changed after reconnecting in Washington, we formed the "Lobby train". I had a comfortable pace, so the line formed behind me, and on we went for the rest of the trail.

My trail family. I can always go out for a hike (and of couse I'll miss those amazing views), but being able to see people throughout your day that you've grown so close to is something special.

Absolutely. Although, if I was going to devote 5 months to a hike again, I would probably choose to see something new. Maybe the Continental Divide Trail (CDT).

Indoor plumbing and running water. I'll add to this also, some people have asked if I just go sleep outside because its more confortable to me. I totally would be sleeping outside on occasion, except for being in the city, it brings a whole other set of issues. When you're in the woods, your threat is animals, where in the city it's humans. You can hide in the woods and it feels safe. Sleeping outside in the city does not feel safe or comfortable.

7. How many pairs of shoes did you go through?

Five. Two New Balance, one Soloman, and then I landed on the Saucony's to finish.

8. Did you have a favorite piece of gear?

Probably my tent. I had a Big Agnes Copper Spur UL1. It was light enough, easy to set up, and comfortable.

Only out of the window of a bus into Steheiken. I saw lots of deer, marmots, pikas, chipmunks, and birds.

10. Did you get sick of any food/what was your favorite trail food?

My elderberry oatmeal actually made me sick one day, so I requested all those be removed from any future resupply boxes. Some heavy food like tuna packets was also removed from my boxes. My homemade dehydrated dinners were awesome. Definately worth all the hardwork that went into preparing those. It was nice having something to look forward to at the end of the day.

Also, one last thing. I have started a new blog site for future adventures. Check it out at adventurouslobster.com