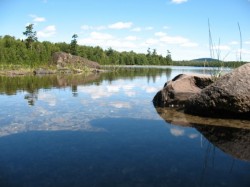 I woke up at Shaw's (thank goodness) and ate breakfast out of my pack. Dick was shuttling a hiker to Greenville, so he asked if I wanted to ride. I certainly did. I set a goal of trying to hitch from Golden Road back to my car and this was close enough. He dropped me off at the outfitters and I hiked toward the edge of town setting up next to a road sign for Kokadjo. I broke out my handwritten sign and thumbed hoping for a weekender heading that way. I waited around for a while when Bill and his daughter, Leah, from Massachussetts drove by and did a U-turn to pick me up. I was just before that moment about to start walking the 18 miles to Kokadjo anyway. They drove me just past Frenchtown Road when I forgot to tell them that is where I really wanted to go. Frenchtown Road is a mile south of Kokadjo. I lavished my thanks to them and started down the logging road. Thirteen and half miles to my car. I got going at a good clip with the road walk and thought that I should put my hat on. Then, I realized, "Stink, I left my hat in their car." All this way and I say goodbye to my hat once again having left in on the bus in Great Barrington, MA. I also left my sign in the car, but I didn't need that anymore. I started trying to remember all of the details of our conversation if in some way when I got home I could try to locate them. Well, back on my way, I heard a vehicle approaching, so I stuck out my thumb for a ride and they already had their signal on. It was Bill and Leah! They'd come to find me! I again lavished more thanks on them and went on my way smiling. Had this happened with me being on the trail I doubt I would have been reunited with my hat, but since it was a road walk, then they could find me. Made my way about three or four miles when an older couple let me hop in the back of their truck and took me as far as West Branch Ponds Camp. After that, I was just another three and a half miles from the car except that I took a wrong turn. I knew that if I didn't find the road conditions familiar after 20 minutes, then I would turn around and take the other fork in the road. I flagged down a couple of guys baiting bear driving an offroad vehicle and asked them if I was in the right spot and they said I took the wrong turn. I had suspected this. Made it back to the fork in the road and ended up finding Second West Branch Pond where I sat for a lunch break.
Shortly afterward, I eventually found my car intact, unbroken, and only a little dirtier than I left her. Reunited I made my way out.

On Lily Bay Road, just north of the Frenchtown Rd turnoff and south of Kokadjo (which I wanted to check out again), I spotted a red fox traipsing into the woods.