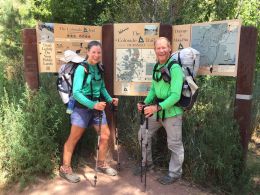 End of the CT. Let the celebrations begin!

Two Step woke me up at 2:00am. "Is rain coming in your side of the tent?" It was only then that I realized that there was a loud drumbeat on the tent roof. "Not yet!", I answered in a less than erudite fashion. I looked at the netting, could see no water droplets, and since I hate to block the flow of air through our tent (and because it would require a modicum of effort) I told Two Step, "I'm just going to leave it open for now." It was the right decision since the rain soon stopped. At least I think it did. I was already asleep, and the tent was relatively dry when the 5:30am alarm sounded.

We had our now routine breakfast in bed (granola and Nido powdered milk) and then had a relatively quick de-camping, leaving at 6:41 in50F cool morning still air. The sky was perfectly blue as we started up our first and only hill of the day. We had 1000 feet to climb in about five miles, and Two Step led a literal charge up the hill. Stoked with excitement to be reaching the trail's end in just a few hours, nothing would slow us down. We were on a mission! As we crested the hill to complete the first 500 feet, we saw a few great campsites with a scenic overlook, and there sat our trail friend, Long John. We greeted him with a rousing course of "Happy Birthday" to celebrate his big day, and then proceeded to have a long, and presumably last, conversation with this incredibly fast and friendly hiker. We talked for nearly twenty minutes, catching up on our experiences, and then wished him a fond farewell.

Two Step then proceeded on her rapid ascent. We were far into the upper mountain zone of mixed conifer forests, and were walking through aspens of grand stature as we crested the top of our 1000 foot climb and headed downhill. Two Step, who is in charge of getting us rides into town, began to wonder if Long John might be able to have his fiancee give us a ride. I pointed out that Long John would soon catch up and pass us, and it would be awkward to ask him to wait for us. She just charged ahead.

As we descended into the lower mountain and then foothill climate zones, the trees and brush obscured the mountain scenery and overpowered the wildflowers. We were clearly spoiled with our above-treeline views, and so there were few stops for views today. We were on a mission! Just then a mountain biker skidded to a stop as he turned a corner and saw me - off the trail but too close for comfort. He rode just ahead of us for awhile. We learned his name (Terry) and we compared notes between his recent completion of the John Muir Trail in California and our near-completion of the CT. It was an interesting conversation, and we talked for over a mile of trail. Before he rode off ahead, he gave us his phone number and told us to call if we needed a ride. Did I mention how great Coloradans are?

We took our first break at about ten miles to sit on a bench commemorating Gudy Gaskill, a founder of the CT. As fast as we had been walking, Long John caught up to us after only a few minutes of repose. Two Step boldly asked him if he could give us a five-mile ride to our hotel, and he graciously agreed. We talked for a few minutes, and as I stood still for only a minute to take a picture, he disappeared down the trail. Wow, he's fast!

We continued our walk through the increasingly dense forest and warmer temps as our elevation descended below 8000 feet. There were few wildflowers, although the showy daisies brought a smile to my lips, but lots of scrubby-looking oaks and short maples. We soon came across a mountain biker talking to a hiker. As we paused to chat, we were amazed to find out the biker was none other than Jerry Brown, renowned for his maps and cartography of the CT and CDT. The hiker was Ernie, who is active as a member of the CT council. We thanked them both for their efforts, and Ernie offered to pick us up at the end of trail if needed. We told him we would get a ride with Long John, and thanked him for his offer. Can't beat Coloradans for their generosity.

Then Two Step renewed her pace. We were on a mission! The trail came to a parking lot, and for a few minutes we were confused as to the path, but we eventually found our way and walked the last 1.1 miles to the end of the trail. There we were met by Long John and his very pleasant fiancee Colleen, and after having them take our picture at trail's end, they drove us to the front door of our hotel. Generosity above and beyond expectations. Did I mention that they're from Colorado.

Thus began our end-of-the-trail meanderings and town chores. But we had two last experiences related to the trail. First, Tim and Becky, two day-hikers who we met on the trail, generously offered us a free dinner at their restaurant Zia's Taqueria! While they could not meet us there, the staff of their restaurant was outstanding! my nachos and Two Step's salad burrito bowl were heavenly, and the portions were sufficient for two hungry hikers. Thanks, Tim and Becky!

Afterwards we walked another two miles to go to Carver Brewery, where we received a free Colorado Trail Nut Brown beer for completing the trail. Yummy! Long John and Colleen were able to also join us for Long John's free beer, and we reminisced about the trail. A perfect end for this epic adventure.

So ends our CT saga. For those of you who have followed us along the way, I hope you have shared in some of the peace and excitement that we have experienced. It was a joy to be able to share a piece of this with you. Thank you for sharing your comments in our guestbook and on Facebook. They really mean the world to us.

In a few days when we return to California, I will do a summary of our trip in terms of statistics (which helps us plan for our next hike) and compare this trail to our other hikes. I also plan to include some general thoughts about the trail. But for now, suffice it to say that the CT is unique in its altitude, stunning flowers, and mountain scenery. I need a few days to reflect to say more.

"May your trails be crooked, winding, lonesome, dangerous, leading to the most amazing view. May your mountains rise into and above the clouds. May your rivers flow without end..." [Be] where storms come and go as lightning clangs upon the high crags, where something strange and more beautiful and more full of wonder than your deepest dreams waits for you -- beyond that next turning of the canyon walls."
Edward Abbey

From the end of the CT in Durango,
Split and Two Step