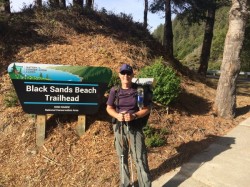 My introduction to Postholer.com happened July 21, 2013 when I met a Thru-Hiker named Story-Time at the Burney Falls State Park camp store. During our short conversation I asked him if I could hike the PCT and he replied, "yes, you just need five months". In August 2013 I met SOBOs Jenn and Andrew at Castle Crags State Park. In 2014 I followed an interesting couple on postholer named Raindance and Chimp. It was quite a coincidence when I crossed paths with them at the Amarati's Market while I was day hiking at Castle Crags. Raindance then became the first woman to Yo-Yo the PCT. Then July 20, 2014, I met Neon, Cheesesteak, Fox and Hound at the Burney Falls Camp Store. These hikers were enthusiastic ambassadors for the trail. You could say they were contagious and I was infected.

My first Multi-day hike was in 1973. I was twenty and working in a sailboat factory in Orange County when a friend invited me to join him on the JMT. My gear at the time consisted of a 5+ pound army surplus sleeping bag and ensolite foam pad. I hiked in Levi cut-offs, Levi jacket and work boots. I had no rain gear, just a plastic tube tent for sleeping in the rain. Cowboy camping and drinking water from a sierra cup was the norm. During my last night on the trail, shivering on top of Mt Whitney, I told myself that someday I would get better gear!

Forty some years later, I am now transitioning into retirement after many years of hard work. In 2000, my wife attended a five month long Massage program in Palm Springs. I stayed home, worked and paid the bills. Now it is my turn to attend a five month long Thru-Hiking Program. We plan to have her accompany me for the first 77 miles then she will return home to hold down the fort and pay the bills. And Yes, I now have better gear!